As opposed to the areas south of the actual peninsula, you are now in 'Cape York proper'.

A lot of travellers drive through it quite quickly, barely stopping in Laura and Musgrave.

But if you have the time the area is huge.


Cooktown and Laura have a lot of history, Kowanyama and Pormpuraaw have remote Aboriginal camping and fishing.


And the Lakefield - Cape Melville area is a destination on its own for many Australians. 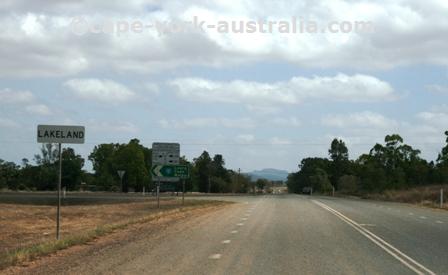 Lakeland Downs
If you drive the inland way up (which leaves the tropical coast for the way back and which I always recommend), you are on the Peninsula once you are in Lakeland.
It's a small township, and it's here that the the main, inland road (Mulligan Hwy) turns off to Cooktown. 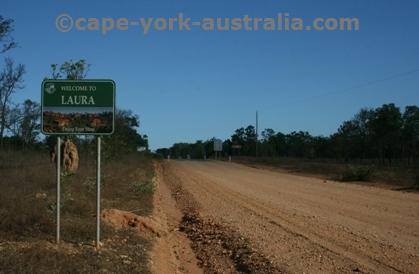 Laura
But continuing on the Peninsula Developmental Road the next town is Laura. It's easy to drive through without turning into the town, but if you have the time there is some interesting history. North of Laura is Fairview - the start of the Fairview Wrotham Road and the Kimba Gamboola Road through to Burke Developmental Road. 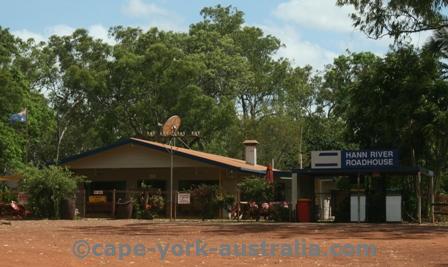 Hann River
The next spot north after Laura is Hann River Roadhouse.
It is just a roadhouse and a camping ground, with a nice swimming hole in the back, a resident emu and a few peacocks, and during the season, probably a backpacker serving you as in many other roadhouses. 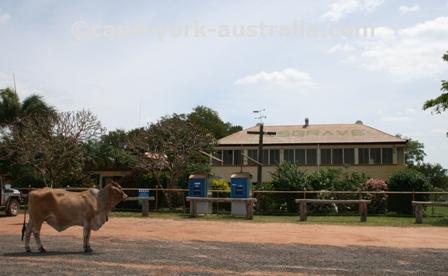 Musgrave
North of Hann River, the road continues, red and straight, north past Artemis Station (which is where the Dixie Koolatah Road turns off), towards Musgrave - a historical roadhouse with a small restaurant, accommodation and a camping ground. It's on the crossroads east to Lakefield National Park and west to Pormpuraaw and to Kowanyama. 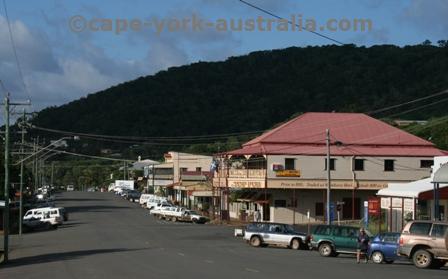 Cooktown
If you come up the coastal way - the road from Cairns to Cape Tribulation, Bloomfield Road, and Bloomfield to Rossville Road you come to Cooktown.
It is a Cape York town not to be missed, particularly if you are interested in history, fishing and good scenery. 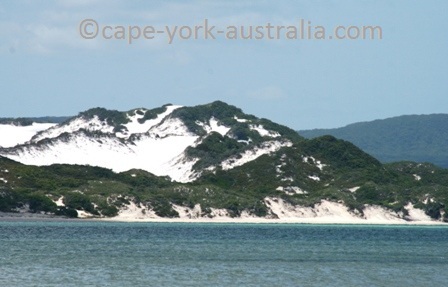 
Hann River Roadhouse is a nice place to stay in southern Cape York.

It is in southern Cape York, between Laura and Musgrave, on the main road up north (Peninsula Developmental). 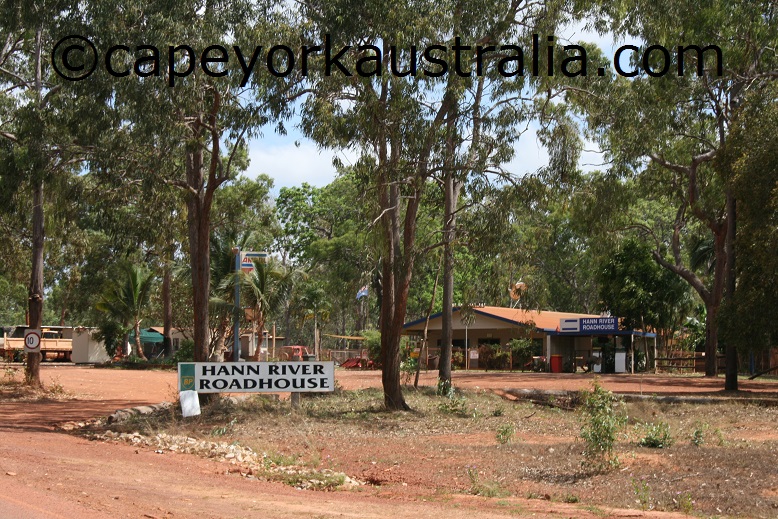 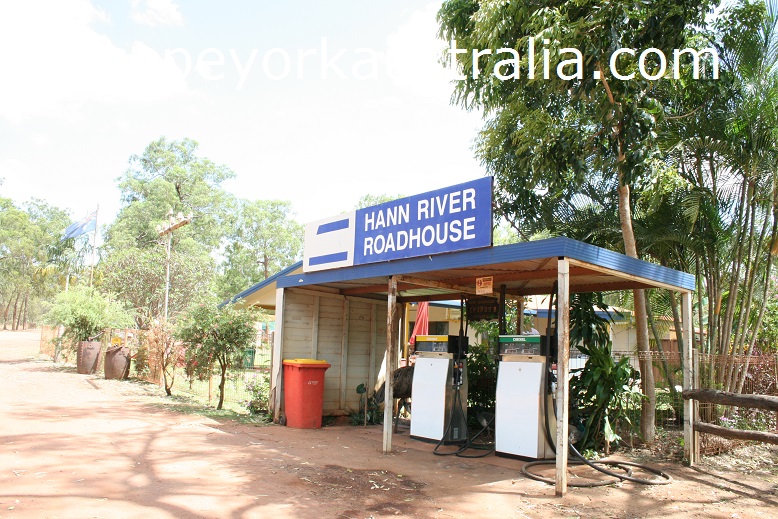 It has cabin accommodation in dongas. 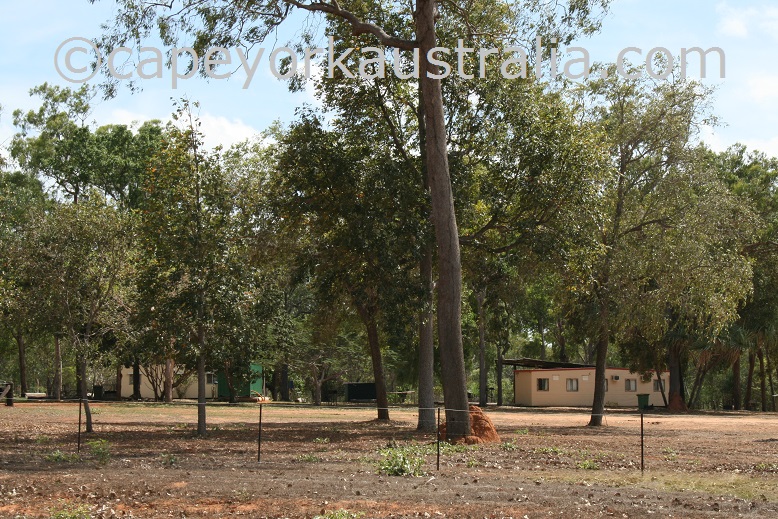 And it also has a large camping ground. 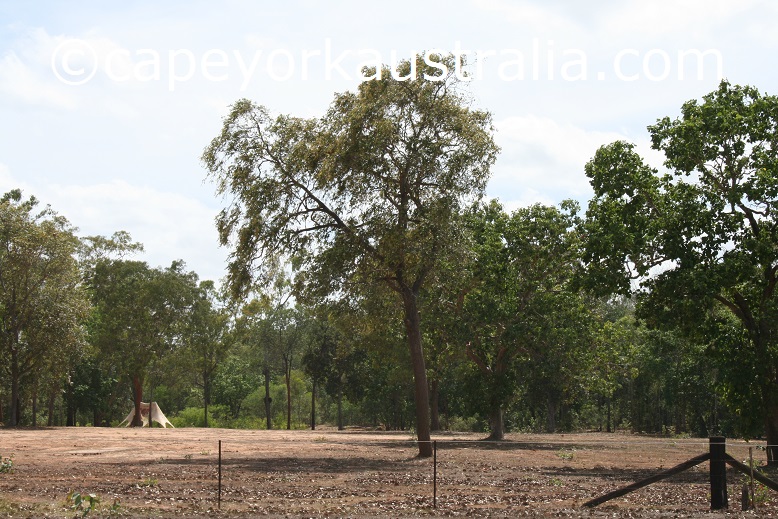 There are a few resident peacocks ... 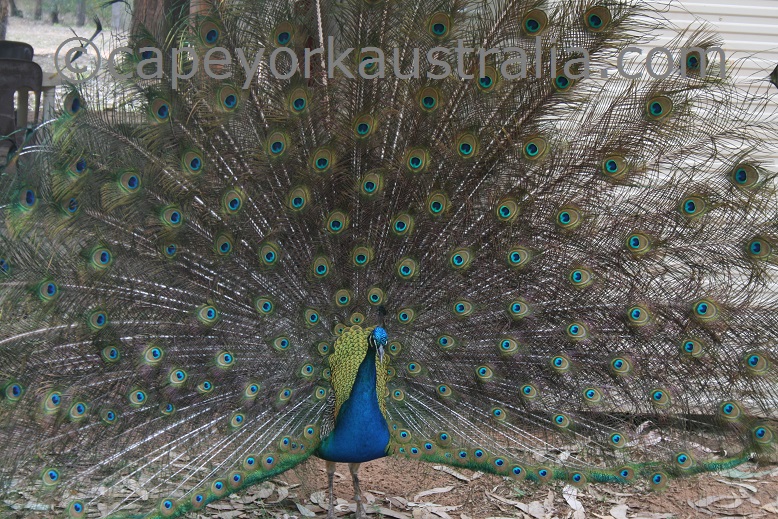 ... and a funny resident emu that likes to put its head into every cup or pot on your table. 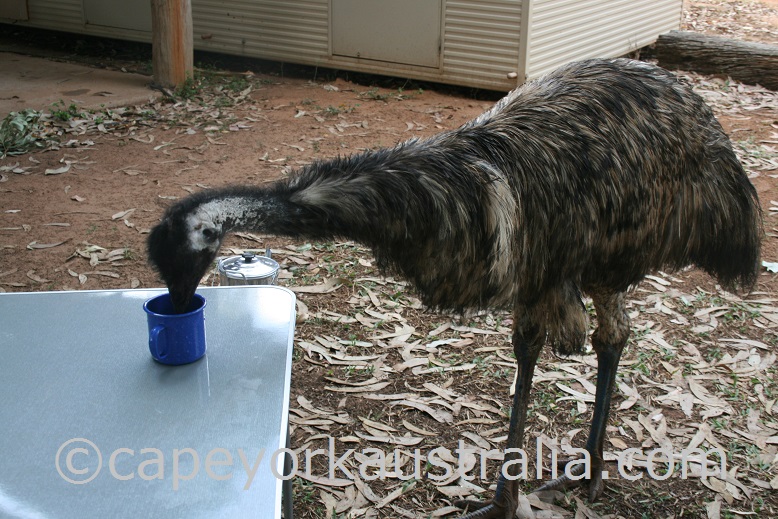 In the back of the camping ground is a nice swimming hole in Hann River. 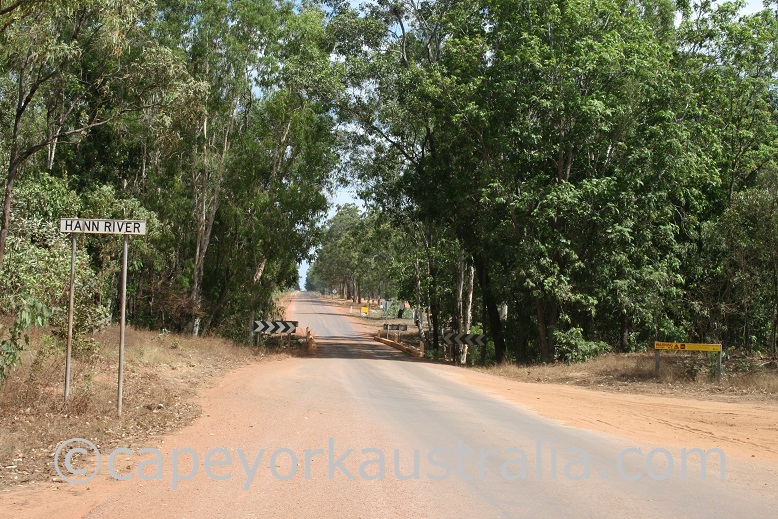 
Artemis Station is a cattle station in southern Cape York.

It is not very well known for travellers, they haven't done as much advertising as some other stations do.

But in fact they do welcome travellers to stay on their camping ground. 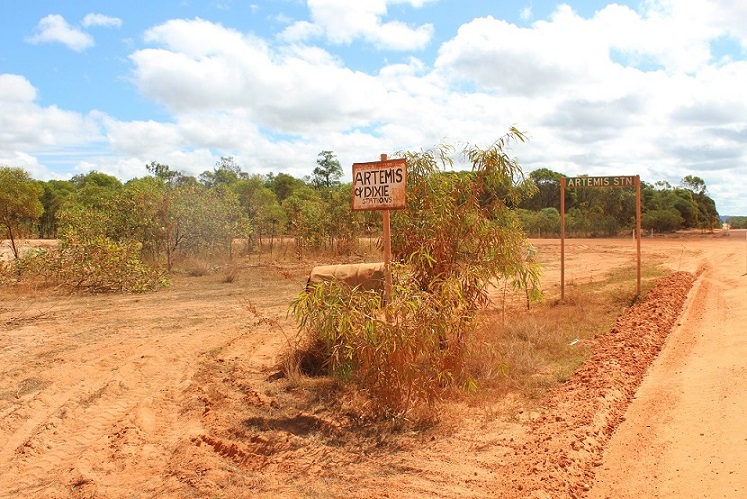 They are well known amongst bird watchers, and particularly famous for the wild and rare golden shouldered parrots that they can take you to. 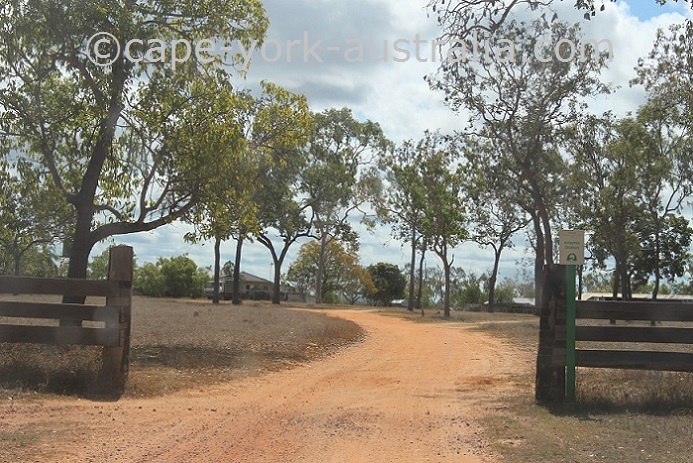 There is a camping ground with toilets and showers, and you are welcome to drop in and stay. 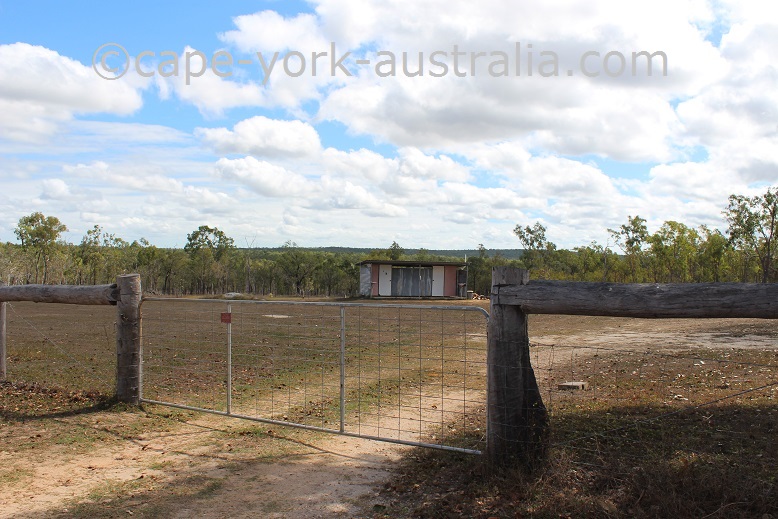 And even better if you are interested to see the golden shouldered parrot - endemic to Cape York. Artemis Station is the best place to take the tour to go and see it in the wild. 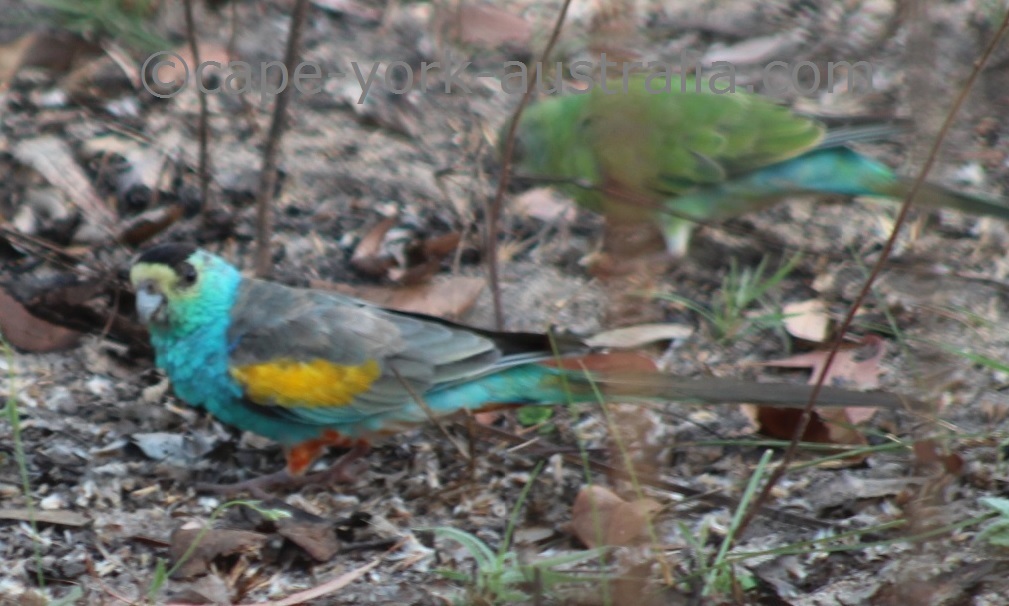 If you happen to camp while there are many bird watchers, the camp ground can get crowded, but most often you have it all for yourself.


Musgrave is a roadhouse on the PDR in southern Cape York.

It is on the crossroads of the tip of Cape York in the north, Pormpuraaw in the west and Lakefield National Park in the east.

It is a nice place to stay with accommodation and a camping ground. 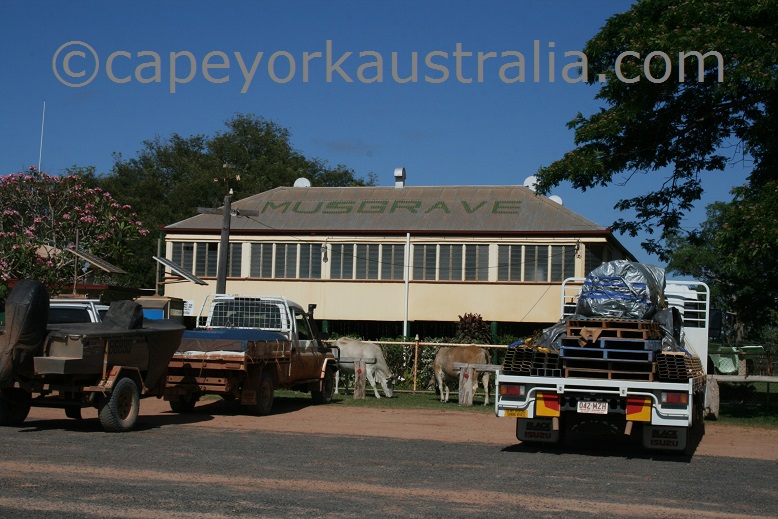 Or it may be worth a stop - the roadhouse sells takeaway food, meals, drinks, souvenirs and basic groceries. 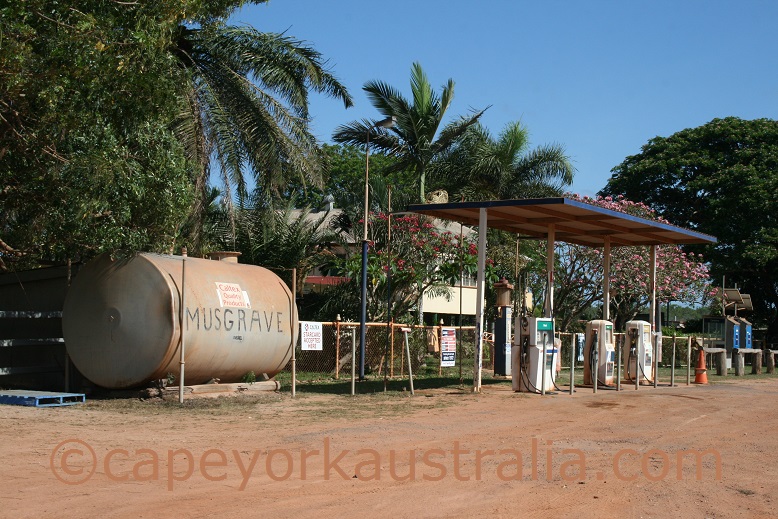 There is also a fuel station and an airstrip. 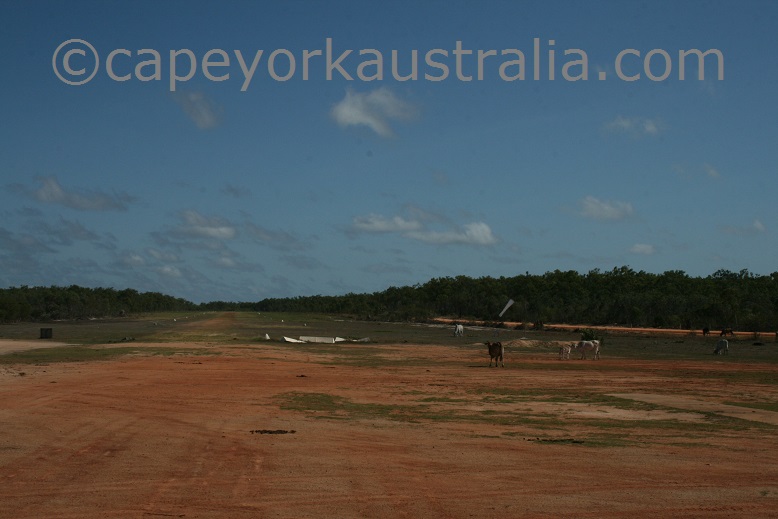 It is a historical place that was built as a telegraph station for the Old Telegraph Line.

You can still see the graves of the early pioneers under a mango tree. 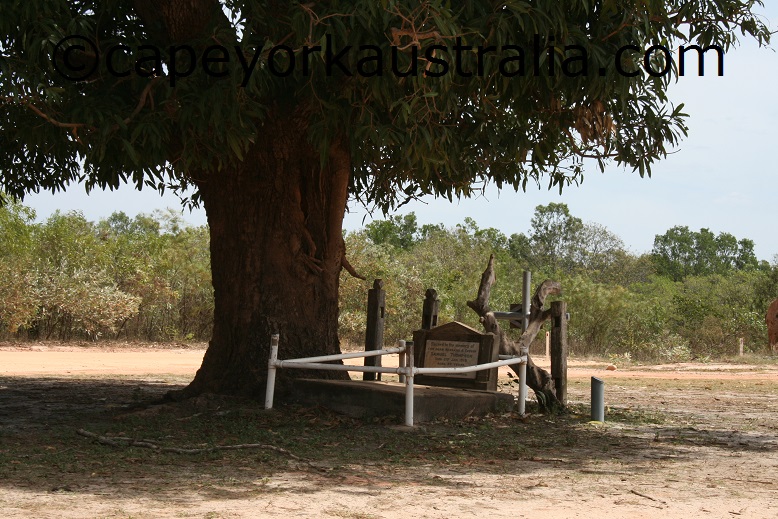 In the 1930s Musgrave was bought into Shepard family - and is today still run by the members of the same family.

In the 1970s the station was turned into a roadhouse, and the accommodation and cafe were built in 1980.