With 30 species of mangroves (as opposed to two in Victoria) on all the coasts of Cape York, there sure is plenty of crab habitat.


Some of the great spots are Bathurst Head, Lockhart River, Escape River mouth and Sadd Point; the west coast around Aurukun, and the coast south of Pormpuraaw and Kowanyama - but of course you can try anywhere in saltwater creeks, river estuaries and mudflats. 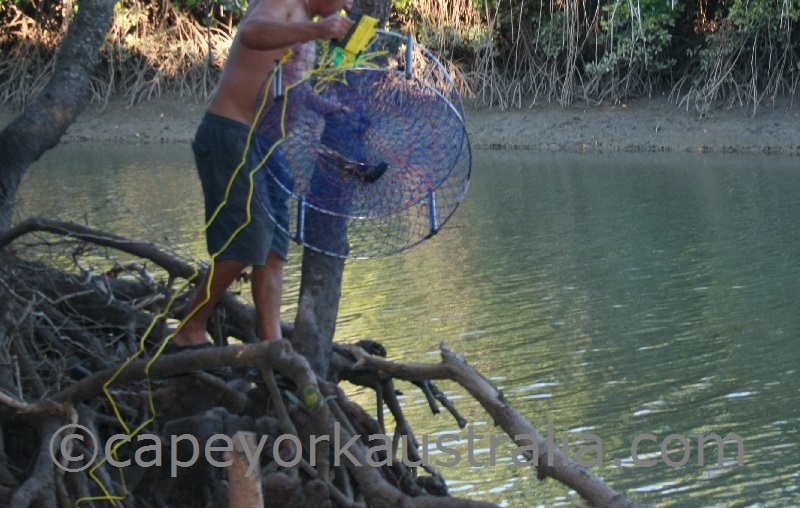 To increase your chances it is good to know a few things about these crabs. Like a lot of other animals, crabs are mostly on the move in the darkness of a night. It pays to leave your pots in over the night, and even better if it is a dark (moonless) night. 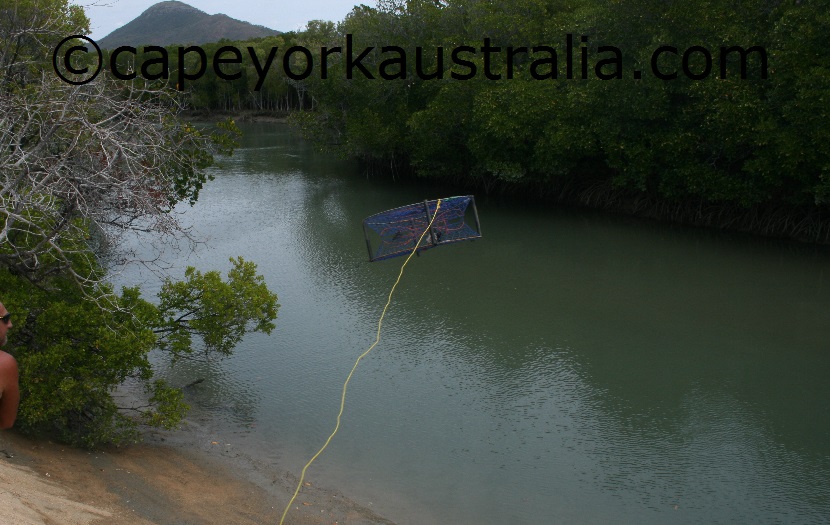 Also they don't like to walk in strong current, so obviously calm waters are the best, and the reason why they talk about the half moon phase is that this is when there is least run in the tide. 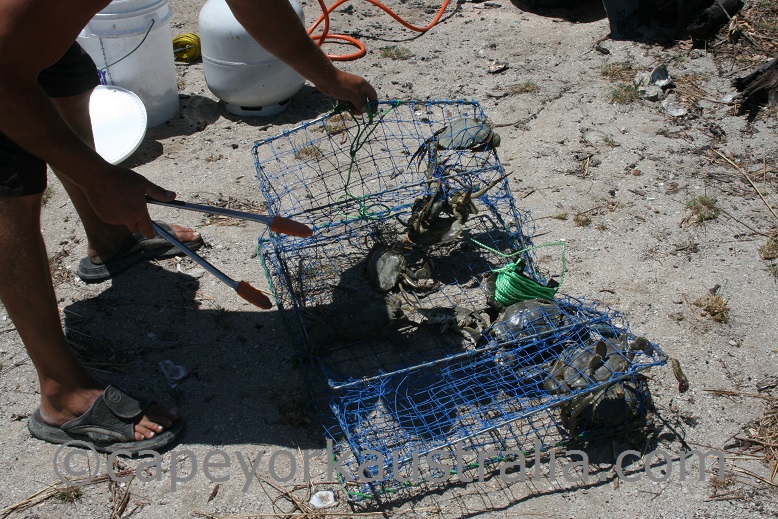 And the third thing is the bait. You may be able to catch them with pig heads and leftovers of your barbeque chicken, but obviously their natural food is things that live in the water. Fish is a good one, and it is a great way to make use of the frame after you have filleted your fish. Just throw it into the freezer until you go mud crabbing next time. 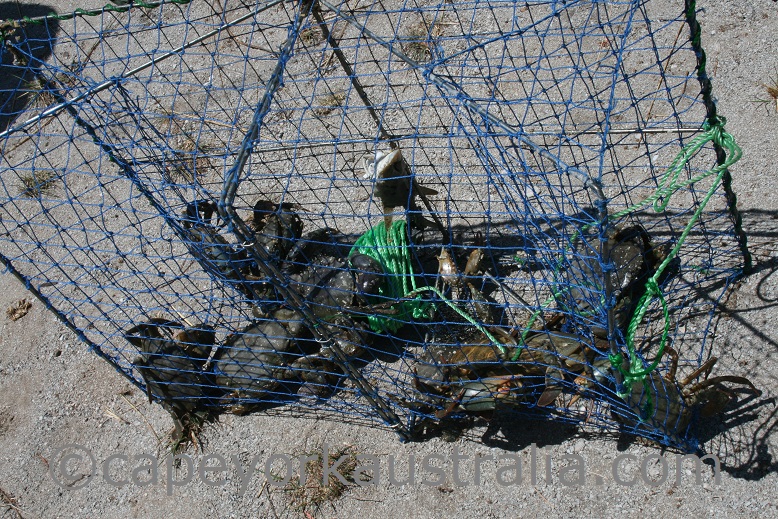 Also I am sure you know that bag limits and minimum sizes apply, and these are different in every state in Australia. The ones that apply in Cape York are all listed in detail in the Destination Guide.


Mud crabs are some of the best seafood in Australia. Also called mangrove crabs (Scylla serrata), they are large crabs with a greenish brown shell. 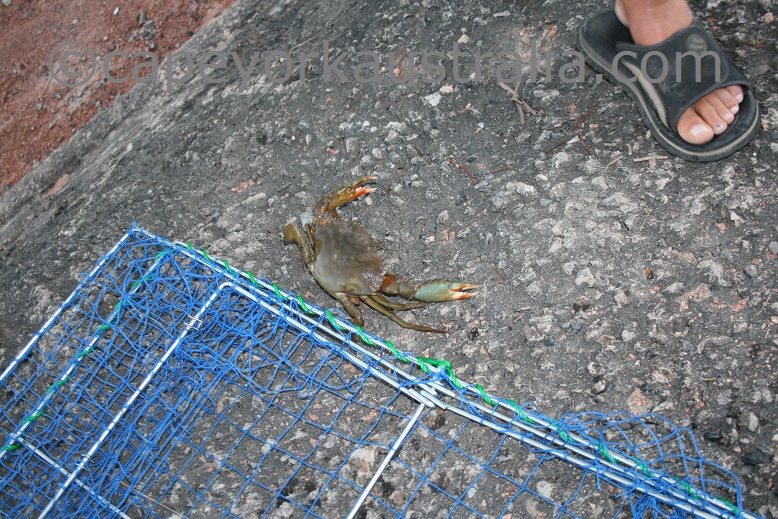 They are also found in Asia and Africa, and they are very common in north Queensland and in the waters around Cape York peninsula. They live in salt water (as opposed to the freshwater yabbies), mostly in river mouths and mangroves. 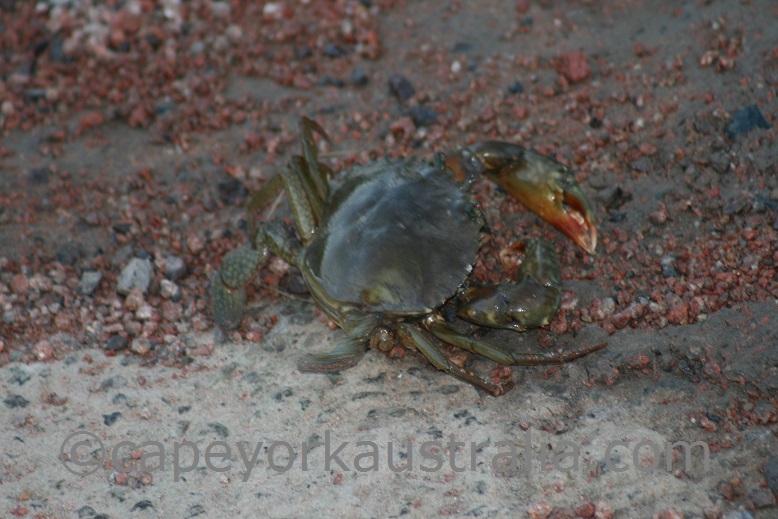 They eat almost anything, including small fish, dead animals and each other. They sometimes moult their shell and moulting individuals can be killed and eaten by other crabs. Fish they catch during the night when the fish are asleep. 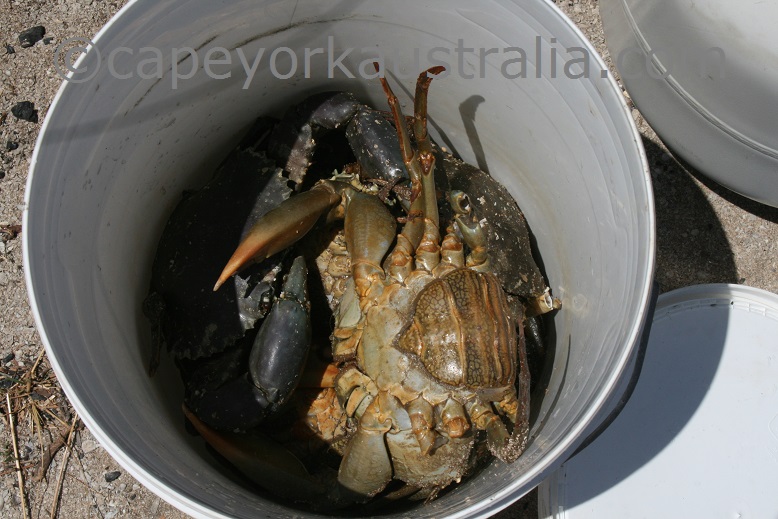 They are eaten by octopus, eels, stingrays, other crabs, and humans. To defend themselves they have long, sharp claws, a hard shell, and a habit to burrow themselves into sand or mud and hide there. 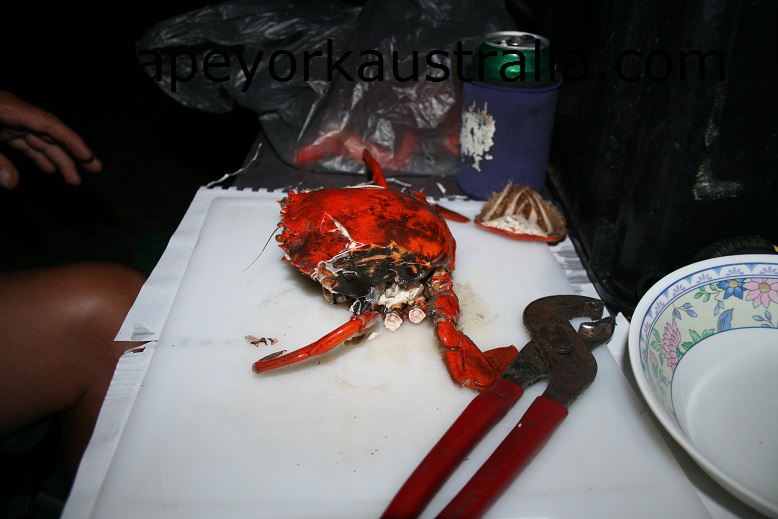 They are considered as delicacy in many countries including Australia. Catching them is a popular activity on a Cape York trip.


Red claw yabby can be caught in Cape York.

It is a yummy yabby that makes very nice salads and sandwiches.

As opposed to the salt water mud crabs, it lives in freshwater creeks. It is found in many creeks in Cape York and is popular to catch.

Yabby nets can be bought in any camping and fishing shops, and good bait to use is fish or chicken, good if a bit off as they like rotten meat.

But a surprisingly good bait is also a potato - read more tips lower down the page. 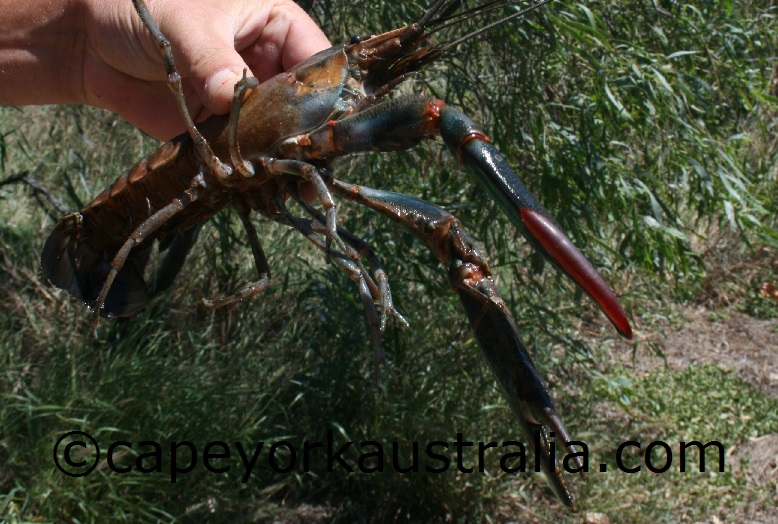 
Red claw yabbies are mostly blueish in colour, ranging between brownish to greenish blue. But as opposed to the blue claw yabbies found in western Queensland, male redclaw yabbies - exactly as the name says - have red patches on their claws.

Males are larger than females and can weigh more than half a kilo and be 25cm long. 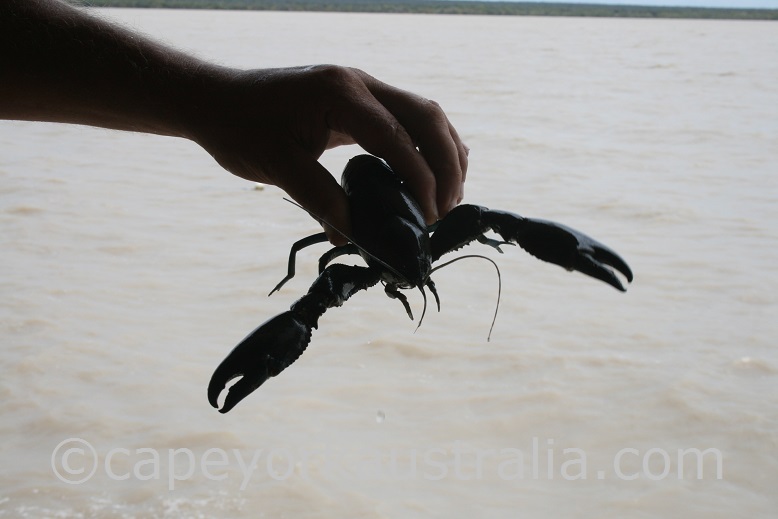 These yabbies, although found in many other places, are native to the top end of Northern Territory, Gulf Savannah, and Cape York. And - Papua New Guinea.

Although native to tropical climate, they are tolerant to cooler temperatures and have been introduced to most of Queensland, even New South Wales, and in the other end of their range to the Kimberley region in Western Australia.

They are also cultivated elsewhere in Australia and in the world, and internationally also found in countries like Singapore, South Africa, Puerto Rico, Jamaica and Mexico.

On your travels in Cape York and elsewhere in Australia (inland Queensland is rich on them), you find them in dams, lakes, freshwater creeks and even fast flowing rivers. 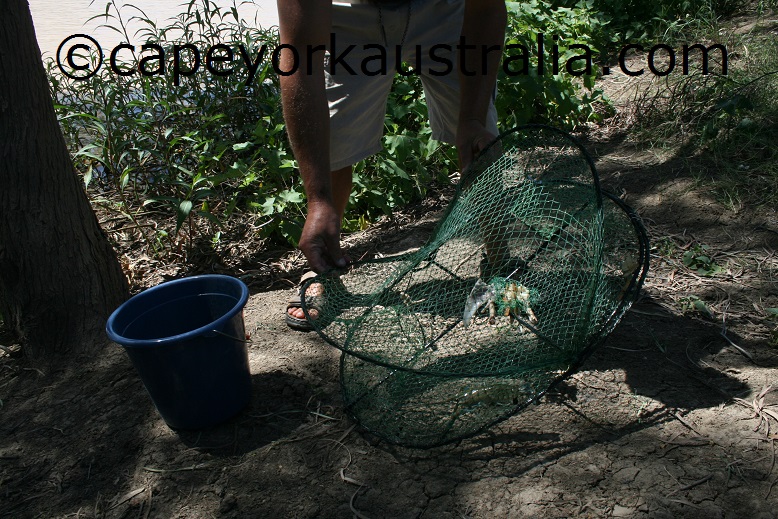 To catch them you have to think like a red claw yabby.

What do they eat, where are they around and when are they on the go?

1. They are known to eat meat, even rotten meat, and if you think about their environment fish is obviously a natural meat for them as opposed to a BBQ chicken. Chicken works, though, as do other kind of meat.

But more interestingly, they also do eat plants, and as opposed to whatever water plants you would imagine, potato has shown to be an amazingly successful bait.

Some even say, go and throw a few potatoes in - the days before you are planning to go yabbying. 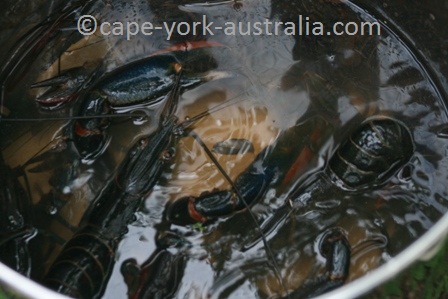 2. Where are they around?

Like fish, they seem to like structures. I guess any animal likes the protection of structures, just like coral reef fish hides in the corals, other fish and other animals are attracted to jettys, mangroves, rocks etc.

Depths more than 3.5 metres work better I have read.

3. When are they around?

Like many other animals, red claw yabbies like to be around in the protection of darkness, even better if it's a moonless night.

So just like with mud crabbing, it's worth leaving your pots in over the night.

4. Also, don't use nets with too large openings - or they will eascape too easily after the meal.

5. And last but not least - don't get yourself in trouble!

Rules and bag limits apply when yabbying, they are all in the Destination Guide.


The oysters found in cape York are black lip and rock oyster.

The rock oyster is obviously a lot more common, the one that you often see growing on the rocks.

They are often small but they are possible to pick and eat. 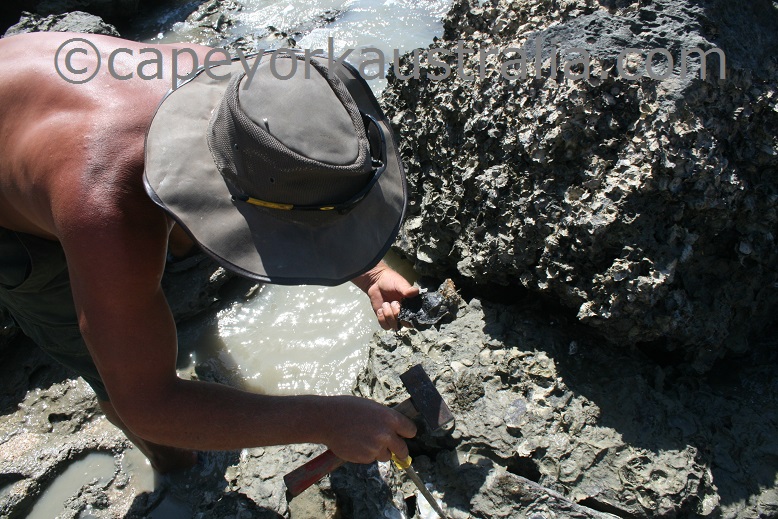 They are oysters endemic to Australia and New Zealand, and like most other oysters they are found in tidal areas in salt water.

Like other oysters they grow slowly, and like most others they also change sex as part of their life cycle, being born as males and becoming females later in life.

They are filter feeders, eating planctonic algea from the sea water. Apart from us, they are eaten by mud crabs, stingrays fish and birds - particularly the ones called oystercatchers. 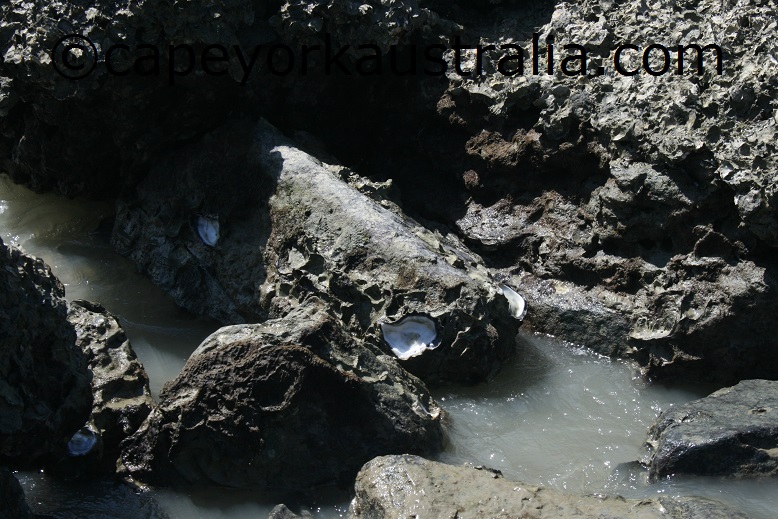 Black lip oyster is a different thing but it is also found in Cape York (as opposed to the rock oyster it is not found in southern Australia).

It likes the warm tropical waters and is found in Indo Pacific coral reefs, and is also found in other tropical countries like Papua New Guinea, Indonesia, Andaman and Nicobar Islands, French Polynesia, India, Sudan; and also in Red Sea and Persina Gulf.

In Cape York, it is obviously rarer than rock oyster, but been found in a few places including Cape Melville, Bathurst Head, Lockhart River, Cape Grenville, Sadd Point, and the coast near Aurukun.

Like rock oysters they are bivalve mollusks, but the main difference is (obviously apart from being different species), that the black lip oyster can grow a pearl inside if a grain of sand or other material is trapped inside.

And it's the highly valued black pearl - regarded the highest quality pearl oyster within the pearling industry.

The black lip pearl oysters are collected from the reef and also grown in pearl oyster farms.