King brown snake is definitely to be considered dangerous.

It is one of the better known Australian venomous snakes, found in almost all of Australia, except the far south.

It is also known for its fair size, often reticulated appearance, the fact that it often lives near humans, that it delivers large quantities of venom, and is specialised in eating reptiles, including other snakes, even of its own species.


Once upon a time when I lived in Charters Towers, I had one in my back yard shed, but more of that below...

King Brown snake has a very wide distribution - some say the widest amongst all Australian snakes.

It is also called mulga snake, and it's true that it lives in mulga country, however it is not restricted to it.

One particular habitat where it does not live is rainforests, but it is found in all drier vegetation zones.

It is not found in Victoria or Tasmania, coastal New South Wales, southern South and Western Australia, or the very south eastern corner of Queensland.

It is found in all of Northern Territory and most of Queensland, including Cape York and our northern neighbour Papua New Guinea. 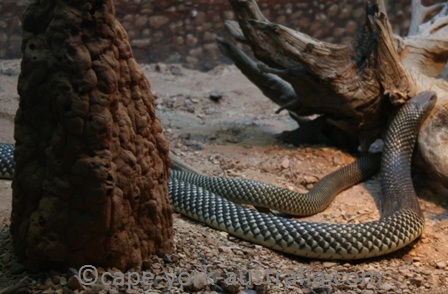 While Australia's largest snakes are pythons, these are not venomous snakes.

King brown snake is one of the very largest of the venomous ones - in fact it takes the first place in weight, and the second, after taipan, in length, in Australia.

It can grow up to three metres in length, although 1.5m is more usual.

They are known to grow larger in northern Australia than in the south of the country.

Like with most other snakes, its colour can vary - colour is never a good indicator in snake identification.

As with all snake identification, you would have to be very experienced to identify a snake 100% just by seeing it.

Often more complicated methods such as scale counts need to be involved.
But it so happens that king brown snake does have a characteristic that gives you a good hint:

Often, each of its scales has a darker and a lighter part, giving the snake a subtle pattern.

That in combination with its large size and bulky head is often enough for recognising it fairly surely.

Mulga snakes have widely adapted to eat other reptiles.

Other reptiles are their favourites, however they do eat frogs, birds and mammals too.

They happily eat other snakes, including all the poisonous ones, and even cannibalise on their own species.

How aggressive they get can depend on the time of the year and other factors (such as location - the northern ones are known to be more aggressive than the southern individuals).

But they are not generally known as especially aggressive unless provoked. 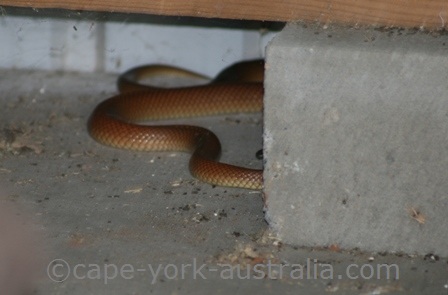 The snake in our shed.

That was what happened to the snake in my shed.

It was not particularly aggressive when first disturbed, but because I went to take photos, and at the same time being inside the shed the snake would have felt cornered, it did start moving aggressively towards me.

What saved me from trouble was that the snake was eating another snake so it was not into chasing or biting, but I did take the whole thing as a good lesson. 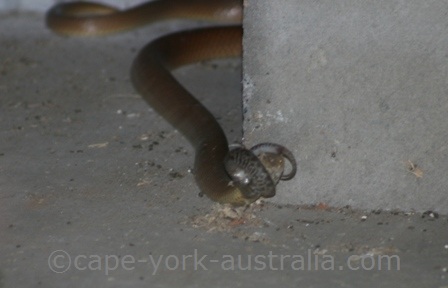 On top of that we don't outrun snakes if they want to chase us!

The poison of mulgas is not the world's strongest, but what makes them so dangeous is that they deliver a lot of it.

They are known for the largest snake venom output in the world - up to ten times of the amount of a tiger snake for example.

They can give multiple bites and are even known to chew while hanging onto the prey in the process of the lengthy delivery.

The name of king brown snake is misleading - they do not belong to the Australian brown snake family.

They belong to the family of black snakes, and it's the black snake antivenom that needs to be used as treatment of the bite of this snake.