Inland taipan is NOT found in Cape York.


But I couldn't help myself and made the page anyway, because the snake is so notoriously poisonous.


Ironically, then, it is also one of the shyest and does everything it can to get out of your way, not even eager to bite when provoked (it finally will).

It is a dark snake with colouration varying from black to brown, with a seasonal adaptation of changing its colour to lighter during the hotter, and darker during the cooler months.

The longest reported specimen was 2.5 metres however a more common length is about 1.7 metres.

The head and neck are often darker than the rest of the body, allowing the snake to heat itself with only head exposed (the same adaptation as the harmless black headed python's).

The inland taipan is not found in Cape York (I just wanted to include this snake as it is the most poisonous in Australia as well as in the world. We do have the coastal taipan).

Like its name says, it is found in the inland, more exactly in south western Queensland, south eastern Northern Territory, and north eastern South Australia.

It is particularly known to be found in black soil areas where the borders of the three states meet.

It is also known to be associated with soil cracks and rock crevices where it hides as there is not much vegetation in its range.

It can also live in burrows of other animals.

They are not very easy to come across as they don't spend a lot of time above the ground during the day time.

In cooler months they show a bit more surface activity, but during the hot months they are only active in early mornings and stay under the ground the rest of the day.

The main diet of the inland taipan is small mammals, mainly rodents and dasyurids.

Prey is commonly cornered in a soil crack or burrow, and then striked, with multiple bites (most other Australian poisonous snakes only deliver one).

The males can fight, the mating occurs in the end of winter (our Dry Season), and the female lays a clutch of about 10-20 eggs a few months later, in a soil crack or abandoned burrow.

The eggs take about 10 weeks before they hatch and the newly born hatclings are almost half a metre long.

Unlikely its more aggressive cousin the coastal taipan, the inland taipan is a shy snake and will do its best to get out of your way.

However, if cornered, it does come to the point where it defends itself like any other animal would do.

First it makes a warning signal, holding itself in S-shape while stearing at the offender.

If that is ignored it strikes, and unlike most other Australian venomous snakes, it can deliver multiple bites.

Its toxin is more venomous than any other snake's in the world, by far.

It mainly consists of neurotoxins, and the symptoms include abdominal pain, vomiting, nausea, headache, collapse and paralysis.

The good news is, the world's most toxic snake is far from the most deadly.

No human fatalities have occured thanks to antivenom.


Coastal Taipan is the largest venomous snake in Australia.

Also unlike the inland species the coastal one has been recorded killing people, as recently as in November 2012 (and probably later by the time you read this), when the Ergon Energy worker Andrew Vaughan was bitten while working with a backhoe operator in dense Lantana bush - one of the snake's favourite habitats.


It is a large snake - the largest poisonous snake in Australia.

Three metre individuals have been recorded, however one and a half to two metre specimens are much more common.

The body is strong but slender.

It is most often olive to reddish brown, but may also be grey or almost black.

The sides of the body are lighter in colour, and the belly is cream, yellowish or light grey, sometimes with pink or orange dots.

The head, particularly the snout, is lighter in colour than the body - many other snakes have darker head instead.

Another distinguishing characteristic is the relatively big head, rectangular shaped as opposed to the neck.

It can be confused with a few other poisonous snakes, such as Eastern Brown, Western Brown, and King Brown snake. 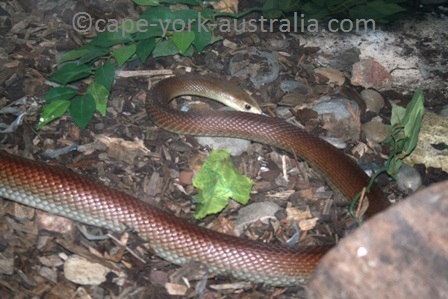 It is found in the southern Papua New Guinea and the coastal regions of eastern and northern Australia, which include the whole Cape York peninsula (also the whole Top End of Northern Territory and almost the whole Kimberley region, elsewhere narrower coastal regions between Derby in the west and about the Queensland-New South Wales border in the east).

Its distrubution covers the area where Australia's wettest and hottest climate overlap (south of the Kimberleys is too dry, south of northern NSW it's too cool).

It lives in many different habitats such as moonsoon forest, open and closed forest, heath and open woodland (the latter particularly in Cape York).

It is also known to be seen at unused rubbish tips, in grazing paddocks and lantana thickets, and particularly in sugar cane fields where it feeds on small rodents.

Like many other snakes it shelters in hollow logs and abandoned animal burrows.


When Is It Around?

They are active all the year around, but most common to see during the late Dry Season (about August to November).

They are mostly active day time (particularly early to mid mornings and early evenings) but may become nocturnal during the hottest part of the year.

When hunting, it moves around with its head raised, using eyesight to look for prey.

When it sees a small rodent, quoll or bandicoot, it first freezes and then moves quickly forward, delivering multiple bites.

Its toxin collapses the prey's nervous system so it cannot move, and makes its blood really thin so it bleeds to death.

Unlike the inland taipan, the coastal taipan releases the prey once injected (to avoid the injuries from the fight), then tracks it down once it's dead.

Mating can occur all year around but peaks in late Dry Season (August - September).

Courtship and male combat have been reported.

Two-three months after mating the female lays 7-20 large, soft shelled eggs in a hollow log, cavities in the ground or under tree roots.

The eggs take between two and three months to hatch, depending on the incubation temperature.

The hatchlings are almost half a metre long and ready to take off on their own.

Young coastal taipan snakes are eaten by goannas and birds of prey. The only enemies of the adults are humans.

Coastal taipan does not usually attack a human unless threatened, however it is known as one of the more nervous snakes.

If it has the space it will most likely escape, but if you corner it (which may well happen uninentionally if you don't know the snake is near you), it will become aggressive and strike (without any warning or after a striking stance, with its forebody and head raised).

Coastal taipan is the kind of snake that gives multiple bites, and they are efficient and accurate. Some studies have shown that their second and third bite are just as venomous as the first one.

Their venom contains different kinds of neurotoxins, that collapse nervous system (paralysis so you cannot move) and blood's ability to clot (internal bleeding).

Symptoms may kick in quickly and include vomiting, nausea, headache, kidney damage, destruction of muscle tissue and collapse.

Death can be quick (as soon as after 30-90 minutes), so the application of first aid and seeking of medical attention has to be immediate.

Untreated bites have almost 100% mortality rate, which was also the case before the antivenom was introduced in 1956 (after the first aid you need to get to the hospital for antivenom).