They are noisy and very playful, and they fly around in large flocks that are easy to see when driving in the outback.

They are very common cockatoos to see, probably the second most common ones, after sulphur crested cockatoos.

They are found almost everywhere in Australia, including Cape York (except the northernmost parts of the peninsula).


They live in the open areas and dry open woodland - a habitat that is abundant on the Cape York peninsula. 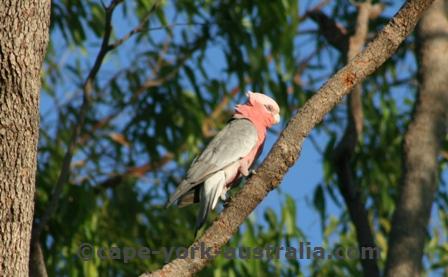 Galahs belong to the cockatoo family, and like with many othe Australian birds, there are a few different subspecies. 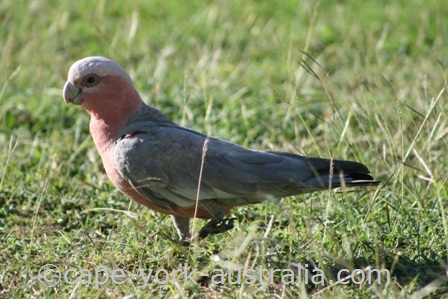 They are pink and grey cockatoos, with a grey back and wings; a pink belly, neck, throat and cheeks, and a paler pink upper head. Legs are grey.

Like in many other birds, juveniles are duller than adults.

Male and female are similar except the eye colour - female's eyes are lighter in colour - red or reddish brown, while the male's are dark - brown or almost black. 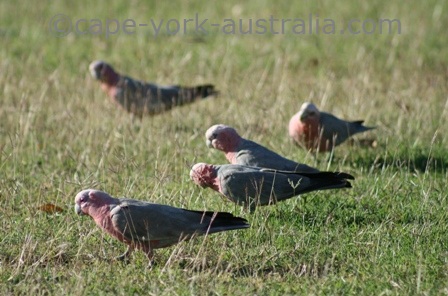 Where Are Galahs Found?

Galahs are native to mainland Australia (introduced to Tasmania), and are one of the most widespread Australian cockatoo species.

But they are found on the southern and central Cape York peninsula.

Their favourite, and original, habitat is the outback, open woodland and grassland, where they are often seen flying around in large, noisy flocks and landing all together every now and then.

They particularly like open country so they benefited from the land clearing that has been happening since the European colonialisation of Australia, and have now also spread to urban areas, parklands, and farmland.

Apart from the land clearing they also benefited from growing of grain crops, irrigation and the increasing water, brought by farmers, to the regions that used to be drier. So their numbers have grown a lot. 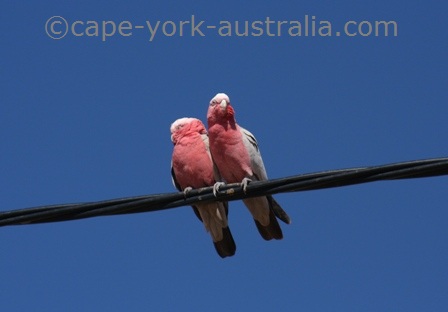 Galahs live in life long bonds with their partner, which is not unusual amongst birds.

They are very loving to their partner, often cosying up next to each other and preening.

Like other parrots and cockatoos, they nest in tree hollows and cavities, which they line with leaves and small branches.

Their breeding season is between July and December in the southern parts of Australia, and between February and July in the northern parts.

Three to five white eggs are laid, and both parents participate in incubation, which takes about 25-30 days.

The young stay with mum and dad for about eight weeks before they leave the nest. 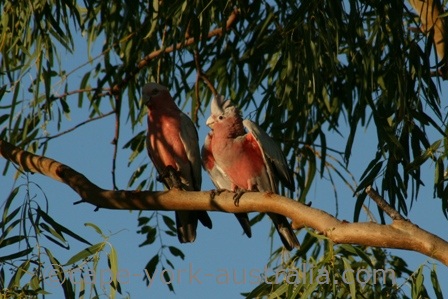 Galahs often eat on the ground, where they look for many different seeds.

They also eat crops (rye, oats, wheat, sunflower seeds), and can cause big damage, making some farmers to consider them pests.

They are very social birds, hanging around in large flocks of up to 1000, and they are fast and strong fliers.

They are very playful and noisy, screetching and doing lots of acrobatics and spins, and just like rainbow lorikeets and other cockatoos and parrots, they hang upside down in rain to catch the water into their plumage. 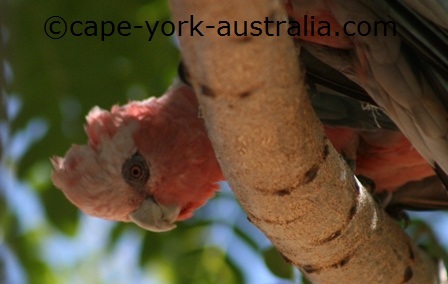 In other words they act a little silly, which is reflected in Australian slang.