What is a flying fox bat?


... and how is it different from the bats that aren't called flying foxes?

Well, it's not really a fox that flies. It is a kind of bat - the two groups are related and belong to the same family.

The difference you notice first is that flying foxes are much larger (and therefore also called megabats) than other bats, that belong to the suborder of microbats.

But there are many other differences.


Flying foxes have large eyes compared to other bats, and that is because they don't use echolocation for navigation as do other bats. Flying foxes use eyesight, that's why they have the big eyes. 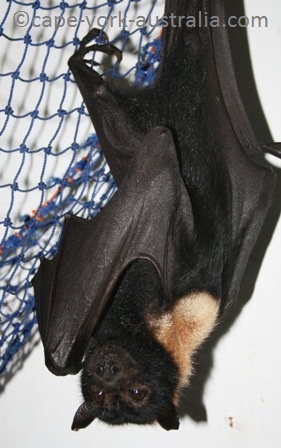 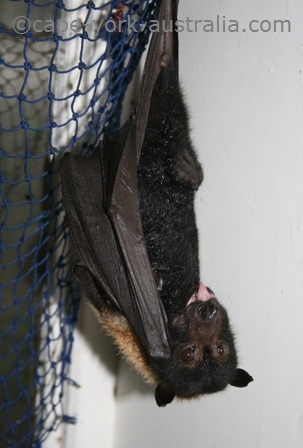 While other bats are mostly insect eaters, flying foxes eat fruit and nectar, which is why they are also called fruit bats.

While other bats mostly roost in caves, flying foxes roost up in trees. 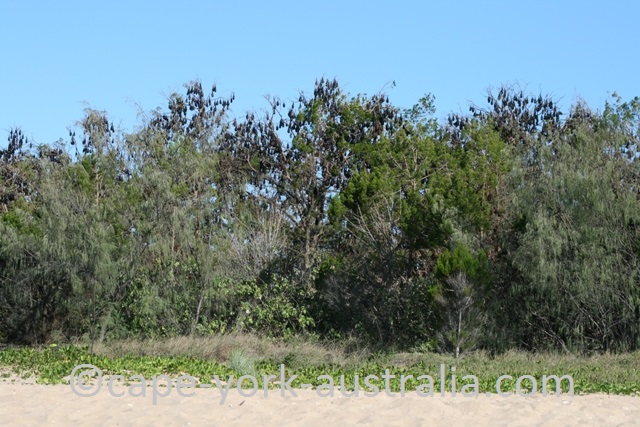 They migrate daily between their feeding and roosting sites, and those migrations can be seen at dusk and dawn when the skies become literally full of them in places.

They live in large colonies and are known to have complex communication which means they are very smart animals. 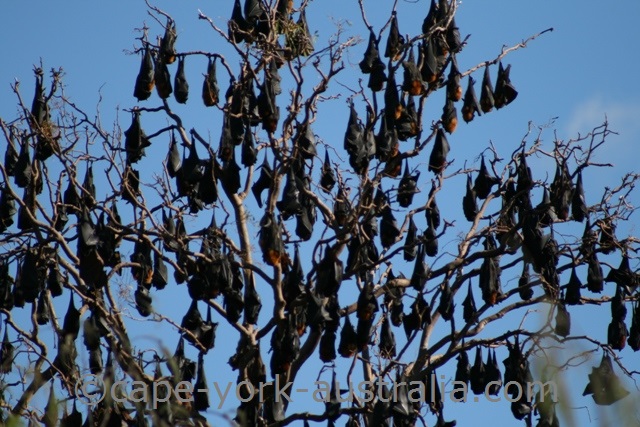 They are only found in the tropical regions of Africa, India, south-east Asia and Australia, while other bats are found everywhere except in the polar regions.

Australia has four species, and Cape York has three of them - the grey headed species is the only one not found here. 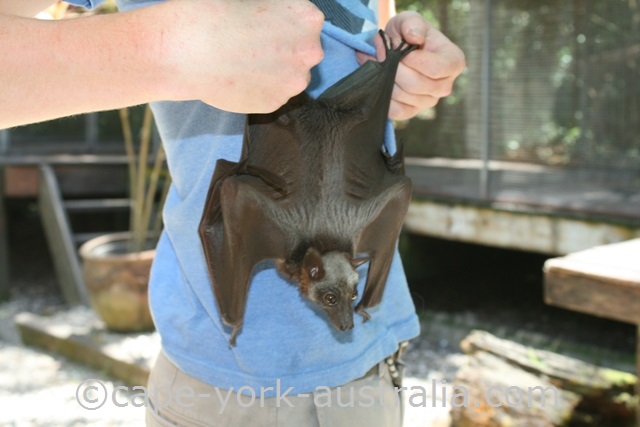 Little Red Flying Fox bat is the smallest and the most common one, it's found in almost all the coastal areas except those in southern Australia, and it covers the whole Cape York peninsula. 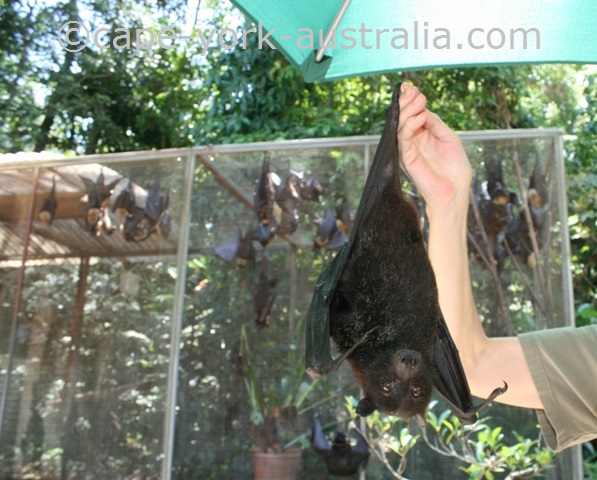 Black Flying Fox is the largest one, and it is found in the coastal Northern Territory, northern Western Australia and northern Queensland, including the Cape York peninsula, except the inland south of it. 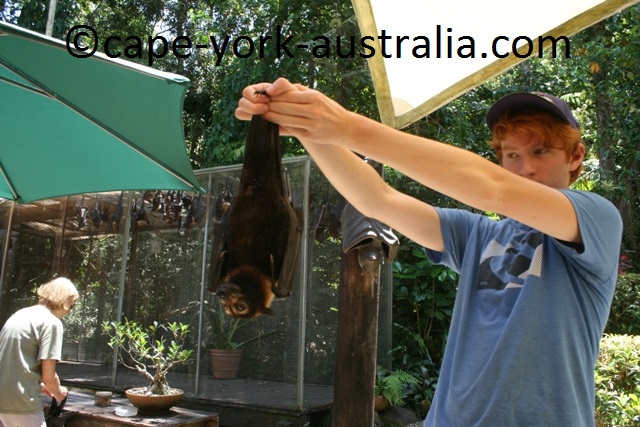 Spectacled Flying Fox bat is the rarest one, it is only found in pockets on the eastern Cape York peninsula and in the coastal Papua New Guinea.


The little red flying fox Pteropus scapulatus is the most common flying fox bat in Australia. It is found all the way from eastern Victoria to western Kimberley region, and the whole Cape York peninsula.

It is also the smallest of the Australian megabats, usually not weighing more than half a kilo. Its colour can vary between reddish and brown, with grey patches on the top of the head and shoulders.

It mainly eats eucalypt flowers and is an important pollinator of them, but will lso eat fruit when blossoms are not available. It is nomadic, and on a daily basis it is migratory, shuttling between eating and roosting sites. At dusk and dawn huge groups cover the sky where they migrate. 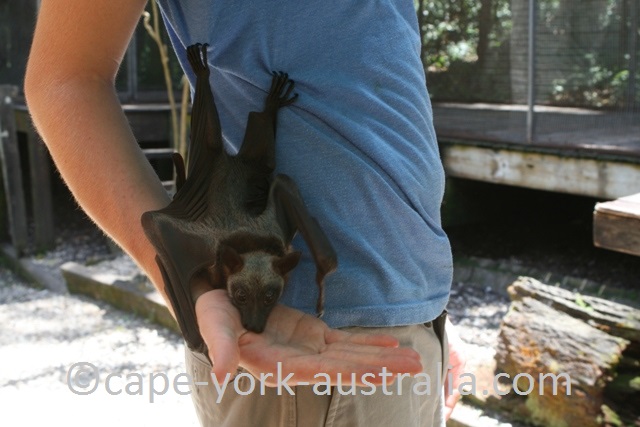 They breed at a different time from other bats, mating in November to January, with youg born in April-May.

They also differ from the other species because of how they hang in clumps of up to 20 bats. That causes some tree damage, and that combined with their large numbers and exaggerated diseases makes them unpopular animals.

It lives in many different habitats from temperate to tropical eucalypt woodland to moonsoon forests. The animal was first described by Peters in 1862 and the first individual was collected on Cape York peninsula.

Their main threats are habitat loss and powerlines. They are hard to track and count, but they are not considered threatened animals.


The black flying fox, Pteropus alecto, is larger than the little red, and is the largest one in Australia and one of the largest bats in the world with weight up to one kilo and a wingspan of more than a metre.

It is often black but can also vary to brown in colour, particularly on the face. 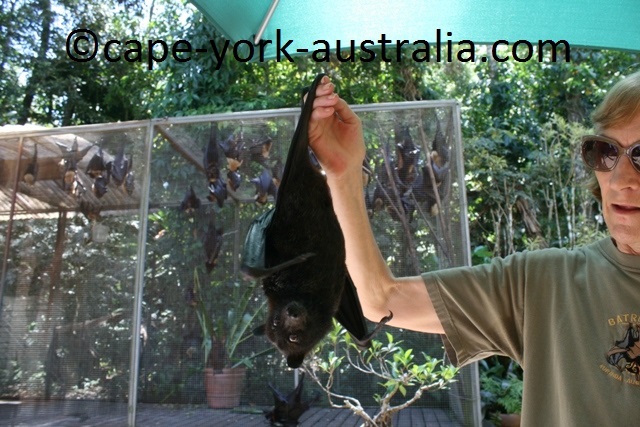 Its range in Australia is smaller and more northern than this of the little red flying fox bat, and it is also found in Papua New Guinea and Indonesia. It lives in many different habitats including the tropical woodlands in Cape York.

Like the little red flying fox bat they love to eat eucalypt pollen, and when that is not available they eat other things including fruit - annoying farmers. Like other flying foxes it is also blamed as a virus carrier, which is exaggerated.

The biggest threats are habitat loss, farmers who kill them, and power lines. They are not considered threatened.


As opposed to the black and little red, the spectacled flying fox Pteropus conspicillatus has a very small range. It is also found in coastal PNG and Indonesia, but in Australia it is found in coastal north Queensland north of Mission Beach and including the coastal Cape York peninsula.

They are fairly large megabats, and like the black flying fox can weigh up to a kilo. It is dark brown in colour, except the beige or yellowish light brown patches on the face and around the neck and shoulders. 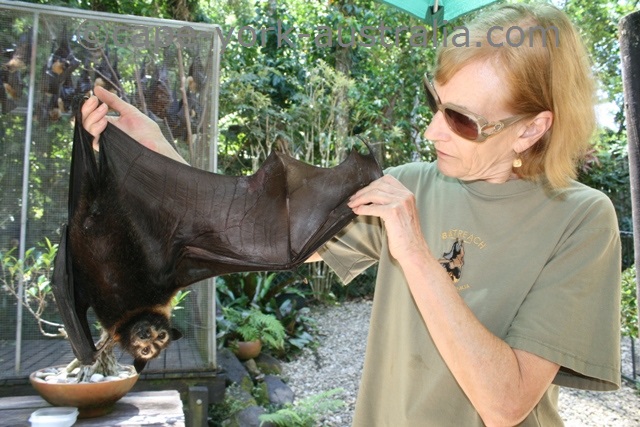 They can be found in different habitats such as mangroves, riparian forest, and eucalypt forests and woodlands, but always close to a rainforest, and the best habitat where they like to live is the rainforest itself.

Like the other megabats on this page they eat eucalypt flowers, but more than the other two the spectacled flying fox eats fruits - of the rainforest, making them important rainforest pollinators and seed spreaders.

Their mating season is the Wet Season, and the young is born during the hottest months in the end of the year.

Their biggest threats are habitat destruction, paralysis ticks, feral cats and power lines. The species was a threatened species in the 1900s, but is now 'least concerned'.