The emerald green male and the bright red female are so different from each other that they for a long time were thought to be two different species.

The species is also found in Papua New Guinea, Indonesia and on some Pacific Islands, but in Australia, the only place to see these birds in the wild is some eastern rainforests on Cape York peninsula.


The best places to see these rare birds and other Cape York's unique birds and animals are in the Destination Guide.

There are about 10 subspecies of Eclectus parrot (Eclectus roratus), found in Indonesia, Papua New Guinea, Australia, Solomon Islands, and some other smaller Pacific Islands.

The only one found on mainland Australia is the so-called Australian Eclectus parrot, Eclectus roratus macgillivrayi, which lives in lowland tropical rainforests.

The largest lowland tropical rainforests that remain in Australia are found in the eastern Cape York, and the species is endemic to these areas.

The Australian Eclectus Parrot is the largest of all the subspecies, about 45cm long and weighs more than half a kilo, with a short tail and a wing span of almost a metre.

But the most obvious thing about their appearance is the huge sexual dimorphism (difference between sexes).

The female has a bright red body, head and wings (back and wings a bit darker red), a blue belly and blue wing edges, a black peak, yellow eyes and a purple ring around the eyes.

The male has an emerald green body, head and wings, blue tail tip and wing edges, and red underwings. It has an orange-yellow upper beak and a black lower beak, and orange eyes with a grey eye ring.

It is unusual amongst parrots for the two sexes to be so different, and it is also unusual amongst birds in general that the red bird is the female, since males usually have the brightest colours.

No wonder early ornithologists thought they were two different species.

The reason for that colouring is their lifestyle. The female spends 90% of her life in her nest hollow while the male is foraging around and often even feeding the female.

The green colour of the male is perfect camouflage while out and about, and the red colouring of the female camouflages her in the darkness of the hollow nest.

If she's out she's likely protecting the nest so the red colour works as a warning for anybody approaching the nest. 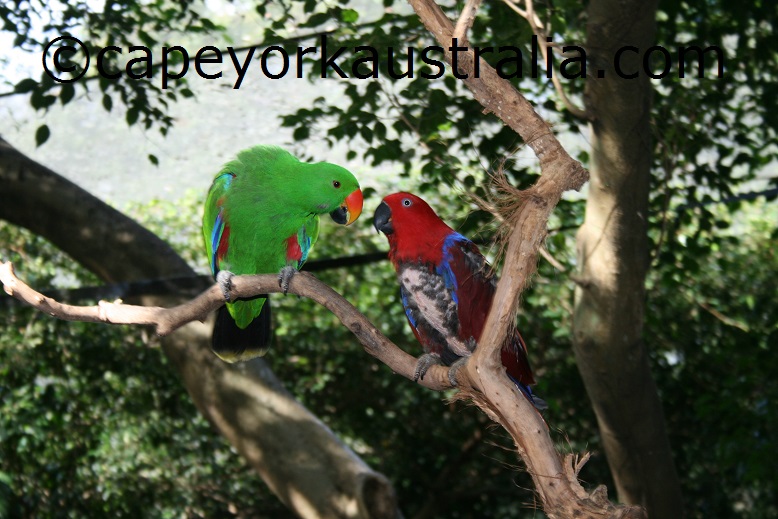 What Do They Eat?

They feed in trees, often high up in the canopy, and their main diet is fruits, nuts, seeds, and nectar from blossoms.

They require a high fiber diet and their particular favourites are papaya and pomegranate fuits. 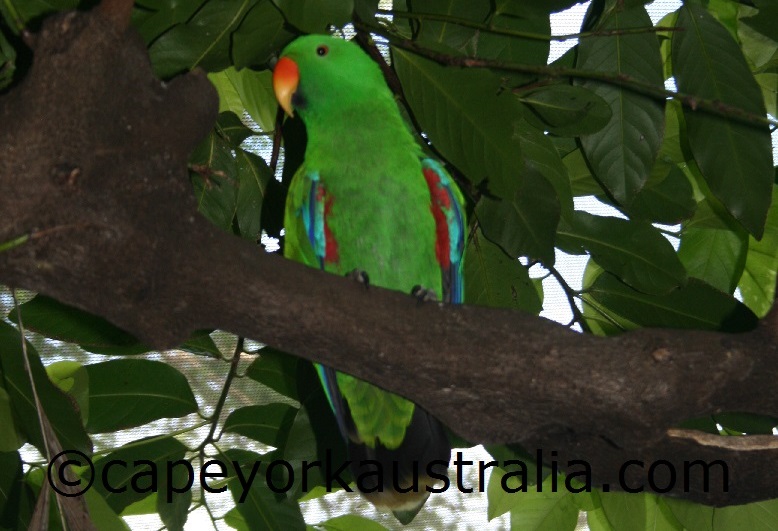 Their breeding season is quite long - from July to January.

They nest in large hollows, high up in tall rainforest trees, which are either emergent, or in a clearing or at the edge of the forest.

Good hollows are not easy to find and the female may spend 11 months of the year defending the hollow, rarely leaving and relying on males to feed her.

Both sexes can mate with several partners, which again is unusual amongst parrots.

Female lays two eggs and incubates them for about 26-28 days.

Both parents participate in chick care and may even be helped by the previous years' offspring - a behaviour quite common in other Australian birds including the laughing kookaburra.

The young leave the nest at about 11 weeks of age.

It usually takes them about two years before they reach maturity.

Females with poor hollow nests that have a male and a female chick are known to kill the male chick to give better chances to the female. 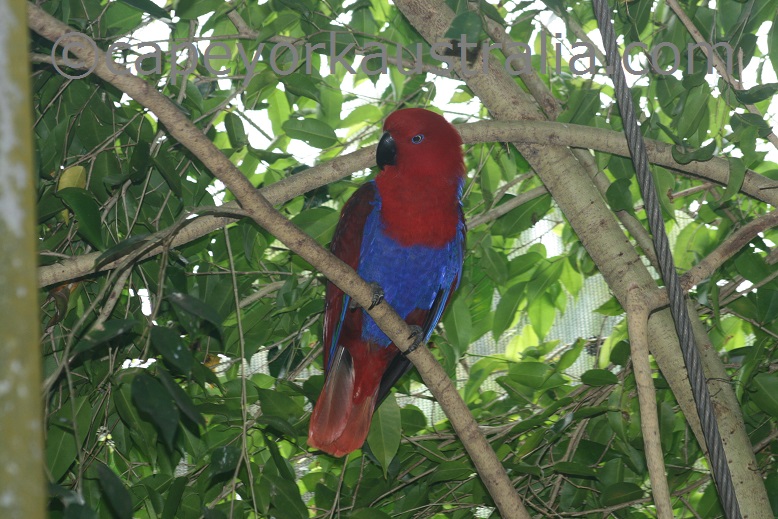 The conservation status of this subspecies is vulnerable, mainly due to the very small areas of lowland rainforest left in Australia.

The main threat is habitat loss, and also any loss of large rainforest trees that have large hollows suitable for nesting.

If you are as fascinated about those birds as myself, you may like the book "Life in the Cape York Rainforest

It is written by an eclectus parrot researcher and while presented in a simple way, contains a whole section about the parrot with some amazing photos and interesting information. There are also photos and information about other amazing birds and animals in Cape York, such as palm cockatoos, green tree pythons and more.