Eastern brown snake is the deadliest snake in Australia.


It is not the most poisonous of all Australian snakes, but due to its habitat it easily becomes in contact with humans, and is responsible for most snake deaths in Australia.

It is also known for its speed and bad temper.

It is found in the eastern half of the country, including Cape York peninsula.

It prefers dry habitat and is not found in rainforests.


It is attracted to farmland and farm buildings because of the presence of introduced mice and rats.


It is a slender snake that is known for its speed.

Its body is streamlined, including the head.

It can be over two metres long, but is more often about 1.5 metres.

It is most often uniform brown or tan but can also be grey or black, and can have banding.

The belly is most often cream, but can also be yellowish or pale orange, and can have orange or pink spots. 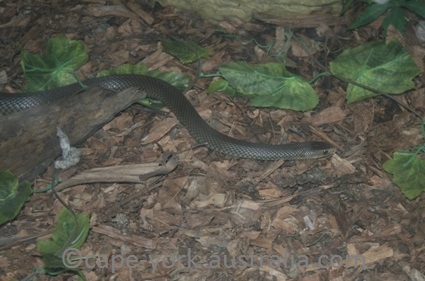 It is found roughly in the eastern half of Australia, except parts of central South Australia and western New South Wales, as well as Tasmania.

It is found in all of Queensland, including Cape York.

It is also found in Papua New Guinea, where it is thought to have been introduced.

Eastern brown snake prefers dry habitat and is not found in rainforests.

It also particularly likes grazing and farmland areas, where there is shelter, water, and abundant food, particularly introduced rodents.

It shelters in thick vegetation, as well as any junk laying around on the ground.


When Is It Around?

It is mostly active during the day time, but can become nocturnal during the hottest time of the year.


What Does It Eat?

It mostly feeds on small mammals, particular favourites are rats and mice.

But it will also take birds, frogs and other reptiles, including other snakes.

Females lay clutches of about 10 to 30 eggs, in about November.

The nests are not guarded. Once the juveniles hatch, they are about 20cm long, and independent straight away.

Although it is not Australia's most venomous snake, it is one of the most venomous ones, the second or third one varying between different sources.

Even though it is known as a bad tempered snake, it first does try to flee when confronted.

If provoking continues or the snake is cornered and has nowhere to flee, it will attack.

You know it's about to attack when it raises its neck and body off the ground, to an upright S - shape.

It strikes quickly, and it sometimes starts its defence with non-poisonous bites.

If poison is injected (you should always act assuming it was), the amount may depend on the size of the snake.

Those cause paralysis and too thin blood (internal bleeding).

Snake bite first aid has to be applied immediately and the victim has to be taken to the hospital in emergency, for antivenom.

Without antivenom, the bite can well be fatal.


Western brown snake is only found in western Cape York.

Its poison is not quite toxic as the eastern brown snake's, but it is known to inject more poison to make up for it.

It has killed many people, mainly in Western Australia.

In Cape York, it is only found in south west.


It is commonly about 1.5 metres long, slender, and has a head that is not larger than its body.

The colour is very variable, but often brownish, with a cream, often orange-spotted belly and either a plain or banded/flecked back.

Its head and neck are often darker than its body, sometimes even to the point where it can be confused with the harmless black headed python - a dangerous mistake!

Some colour variations can also resemble eastern brown snake, and juveniles can be confused with Dwyer’s, grey, orange naped and red naped snakes, as well as suta suta. 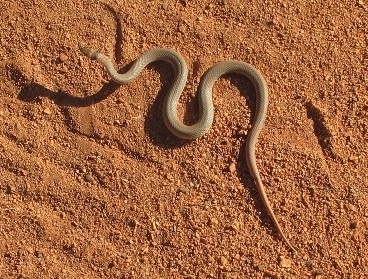 
Where Is It Found and When Is It Around?

Western brown snake is found all over Australia except eastern Queensland, most of New South Wales and Victoria, south eastern South Australia, south western Western Australia, and all of Tasmania.

On the Cape York peninsula, it is found in the south east.

It lives in many different habitats such as dry open forest and woodland, scrubland, heathland and grassland.

It is usually diurnal, but may become nocturnal during the hottest parts of the year.

It can be found sheltering in hollow logs, rock crevices, soil cracks, and under rubbish, like many other snakes.


What Does the Western Brown Snake Eat?

Rodents and lizards are its favourites but it also takes frogs, smaller birds, reptile eggs and other snakes.


Mating and Breeding of the Western Brown Snake

Mating takes place during late Dry Season - the hottest time of the year.

Between November and February, the female lays 20-40 eggs. 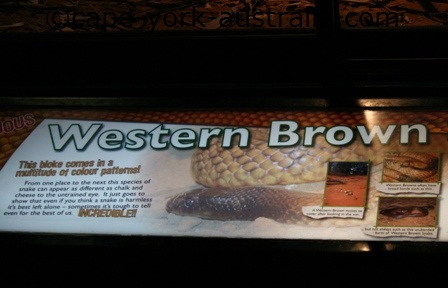 Like the eastern brown, it enters buildings in search of rodents and so comes in contact to humans.

Like other snakes, the western brown first tries to escape but will attack if cornered or threatened too much.

And it is known to be fast.

Its venom is not as toxic as its cousin eastern brown's, but it is known to deliver about three times as much.

Its venom contains neurotoxins and haemotoxins.

The symptoms may appear quickly, but sometimes not at all until the victim collapses, so the bite should be taken seriously even if there are no symptoms.