Dragon lizards is a group of Australian reptiles.


More than 60 species are known Australia wide, in Cape York and north eastern Australia we have a few.

You can recognise dragon lizards from a fairly big head compared to their body, from a fairly slender body and a long, thin tail; and their long limbs with long digits, the fourth of each digit is the longest one, in some species by far the longest.


We don't have the famous bearded dragon, but we do have the even more amazing frilled lizard, and some other great ones. 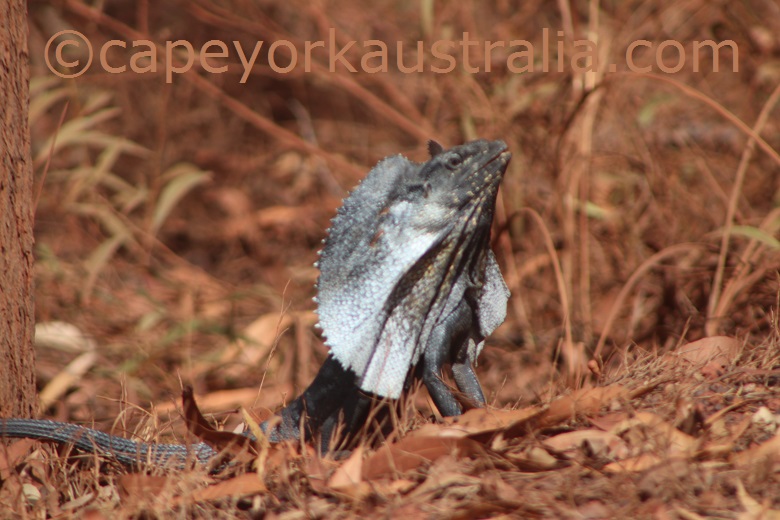 Frilled Lizard
Frilled lizard is the only one that has a frilled neck, opened when the animal feels threatened.
It is a fantastic lizard to watch, and it is found in the open forest and woodland in the whole northern Australia, including Cape York peninsula (particularly Cooktown, Mareeba, and Mt Molloy areas). 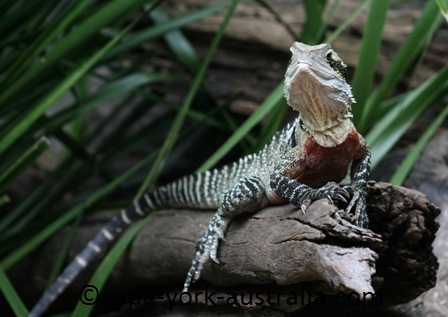 Eastern Water Dragon
Eastern water dragon is another beautiful dragon, with a cross banded pattern, black eye stripes and spines along the neck and back.


It is one of the most common dragon lizards to see, found in the rainforests and moist open forests from Cape York peninsula in the north to Victoria in the south. 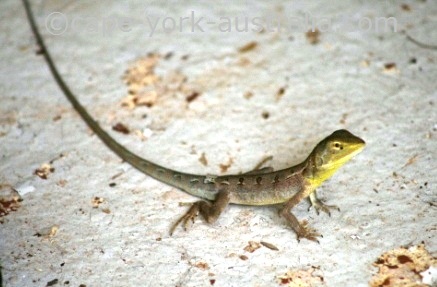 Tommy Round Head and Northern Two Lined Dragon
Both are small, with a relatively large head, a long tail, and a distinctive pattern on the back.
Both live in dry forest and woodland, the first from  Maytown south to Brisbane and the second from Cooktown to Chillagoe, and west to Northern Territory. 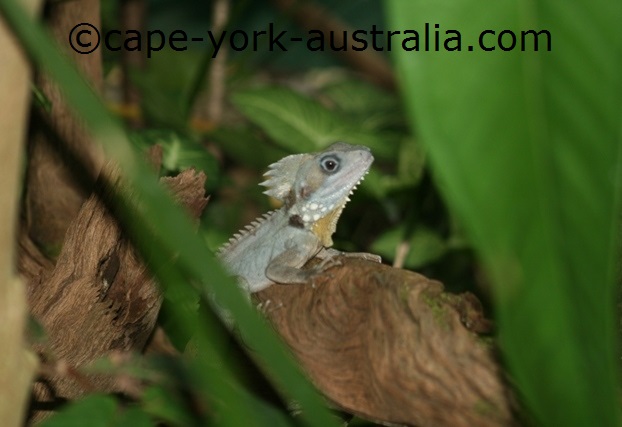 Boyd's Forest Dragon Lizards
Boyd's forest dragon is even spinier than the eastern water dragon lizards.
It is greenish to yellowish brown and has a long tail, a neck fold, and white spines on the head, neck and under the throat. It lives in rainforests just south of Cape York, on Atherton Tablelands and south to Paluma Range National Park.


Our frilled lizard is different from all other lizards in Australia.

It is even Australia's reptile emblem, although it is also found in our northern neighbour Papua New Guinea.

And it was pictured on our two cent coin (which is no longer in use). 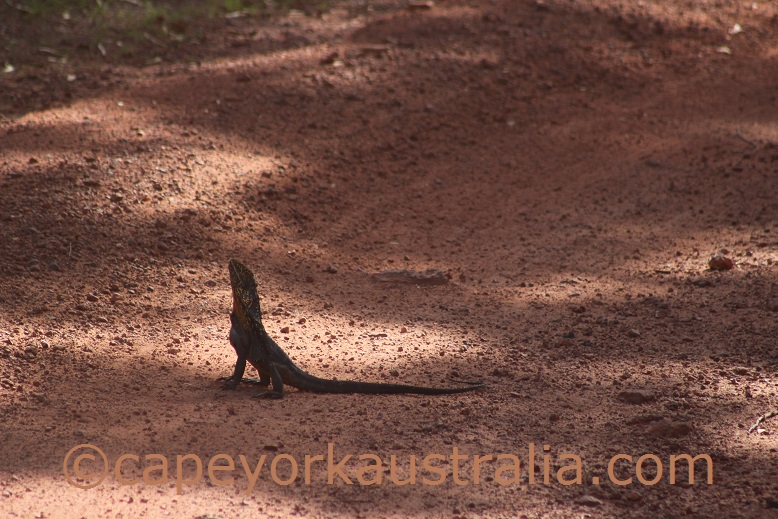 It's definitely a special one, mainly thanks to its impressive frill, which opens when the lizard is threatened.

It is also a fairly large lizard, up to almost a metre if you include the tail.

It belongs to the dragon family (Agamidae), and is known as one species - Chlamydosaurus kingii - but there have lately been some thoughts that there may be more than one.

Like other lizards and other reptiles, it relies on the outside temperature to heat up its body. 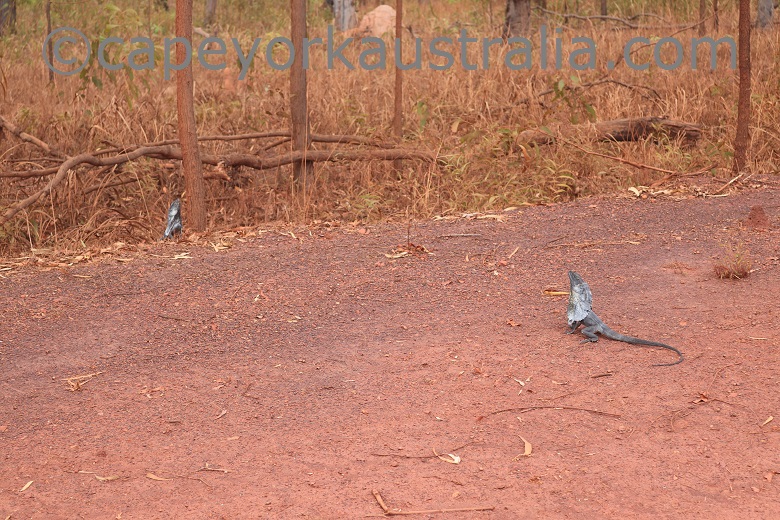 So it likes hot climate, and is found in the whole northern Australia, including Cape York.

Where to See the Frilled Lizard?

Frilled lizard spends more than 90% of its time in trees.

So rather than looking on the ground, watch up instead.

However, the lizard is hard to see.

If it's up in trees, it has the habit of hiding behind the trunk and as you move, it moves exactly to the opposite side to the trunk from you.

(so it's better to be two than one when trying to spot it).

But even if it was on your side of the trunk, the lizard has excellent camouflage.

Its colour is adapted to its environment and its folded frill makes it look like part of a tree trunk. 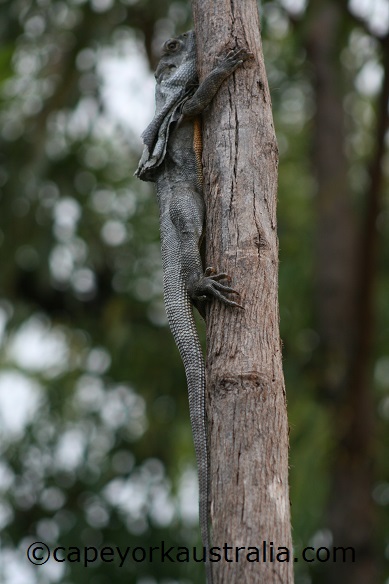 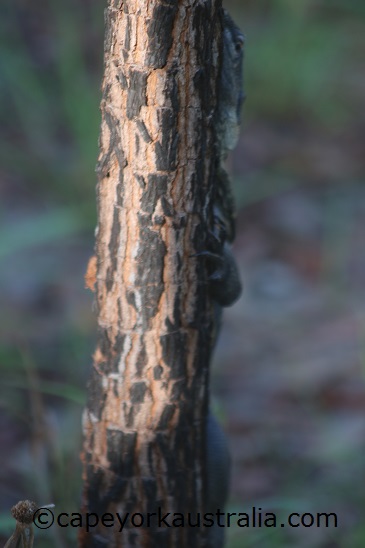 So you may well not see a single one during your whole Cape York trip unless you really keep your eyes open for it and its camouflaged look.


The Frill of the Frilled Lizard

But if the camouflage does not work ... it makes use of the next defence method - the frill.

It opens its mouth widely, and that opens the frill in the manner of an umbrella.

It's an impressive sight, and the frill is often colourful with yellow, orange and/or red scales. 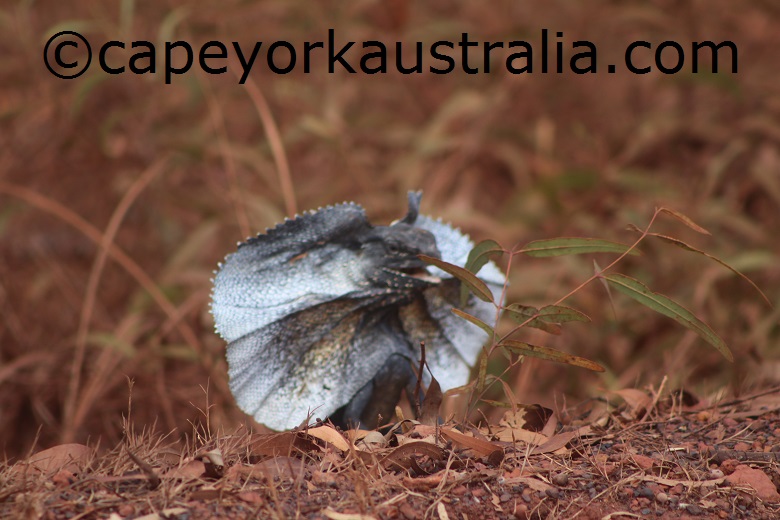 If it still feels threatened, it may hiss, slap its tail to the ground and even jump towards the attacker.

If that does not scare the attacker away, it runs, and it runs on two legs which looks hilarious. 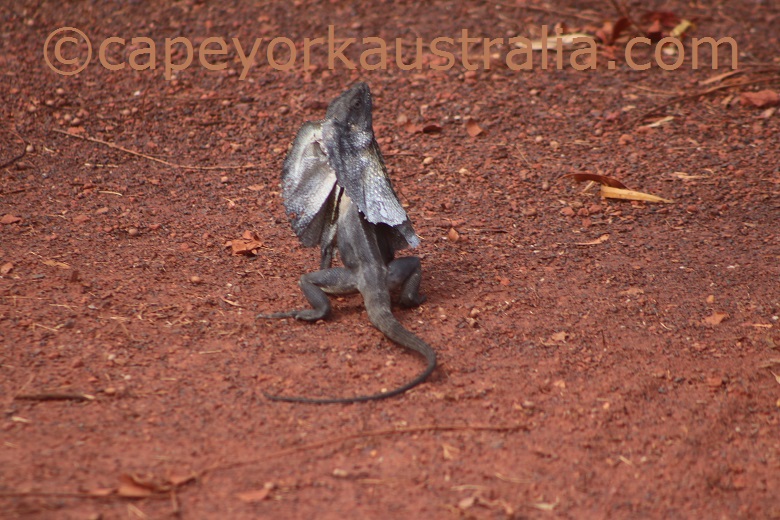 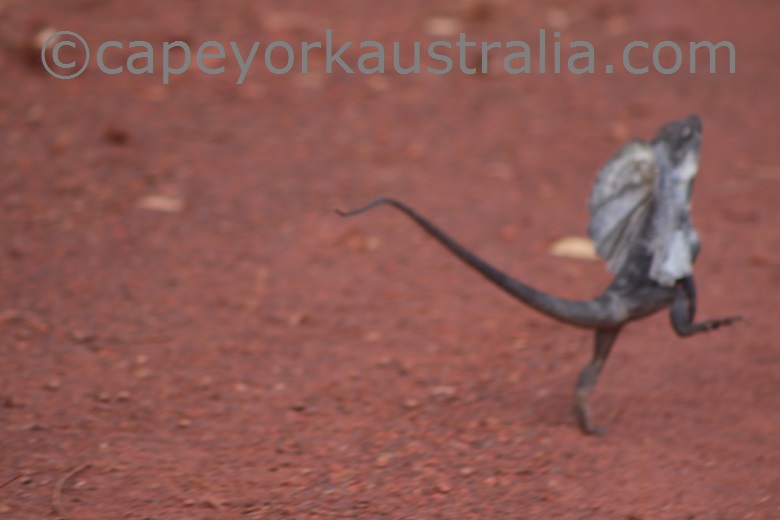 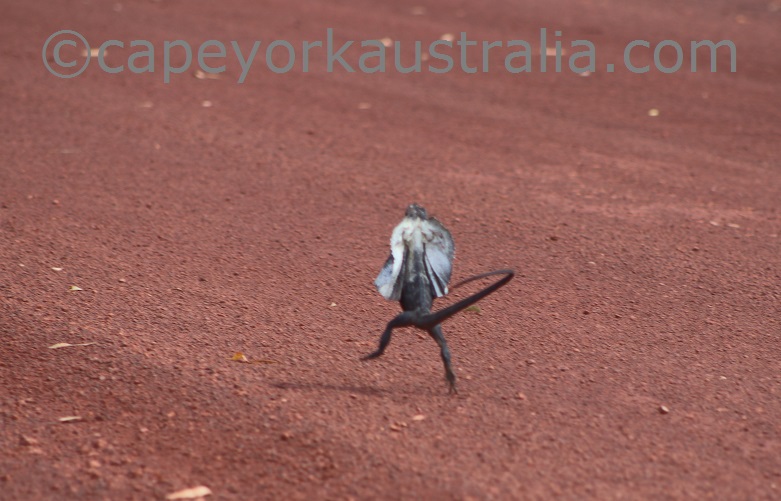 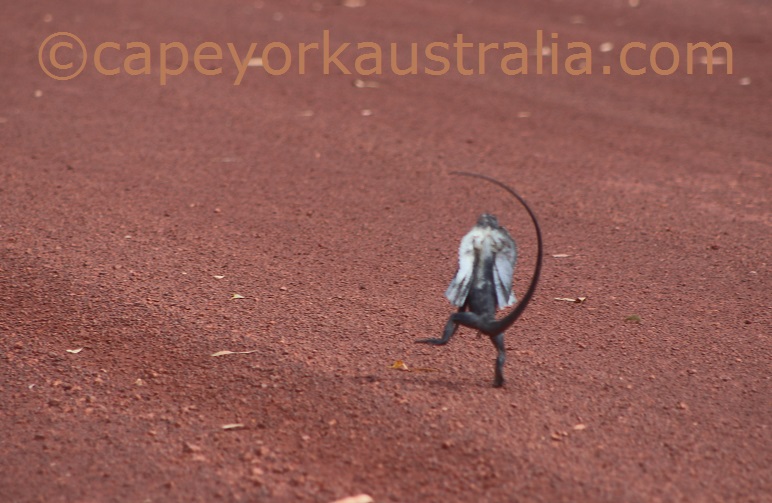 Its prefered habitat is hot and humid tropical forests, savannahs and woodlands, where it likes basking in the sun to heat its body temperature.

It also likes a grassy or shrubby understorey, but there needs to be trees.

It eats insects, spiders, other reptiles, even small mammals. Particular favourites are moths, butterflies and their larvae, as well as beetles and cicadas.

They are ambush predators, which means they are sitting - camouflaged - and waiting for the prey to come to them rather the other way around. 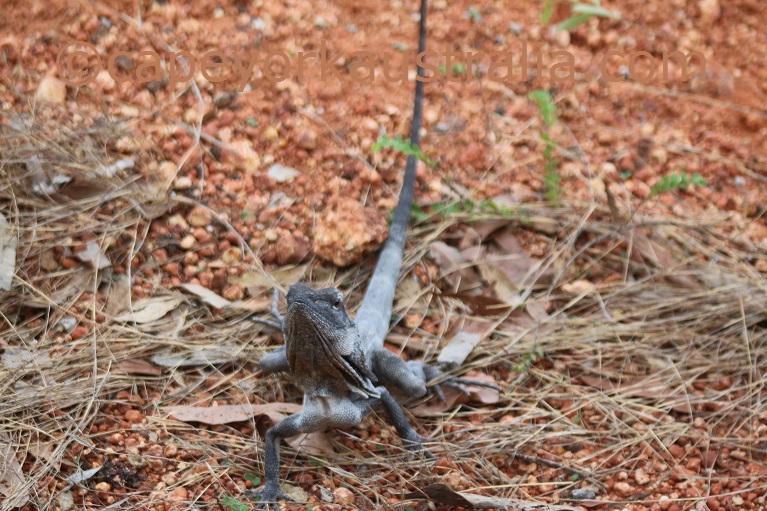 A frilled neck lizard near Weipa.

The animals that eat frilled lizards include birds of prey (large eagles, owls), other reptiles (larger lizards and snakes), and predatory mammals such as dingos, quolls, and more than anything - feral cats (what a pest they are!).

The male is larger than the female but the colouring is the same.

(the body colour mostly depends on its environment. A desert individual has yellowish or reddish brown colouring while a moist climate individual has darker greys and browns).

They breed during the Wet Season and often mate during the build-up (late Dry), as early as in September. 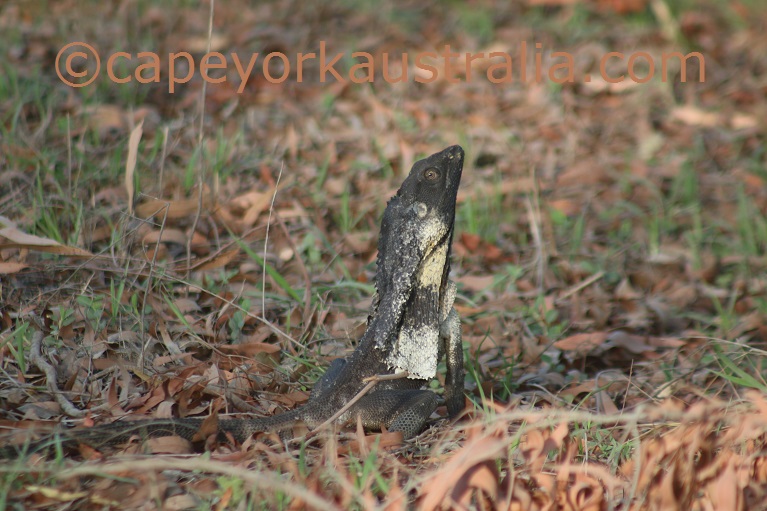 A frill neck lizard near Kowanyama.

Female lays about dozen soft shelled eggs in about November, and the young hatch in about February.

Like in Australian crocodiles, the gender of the young depends partly on the outside temperatures.

In the average temperatures (about 30°C) equal numbers of males and females are born, while if it's hotter than that there are more females amongst the young. 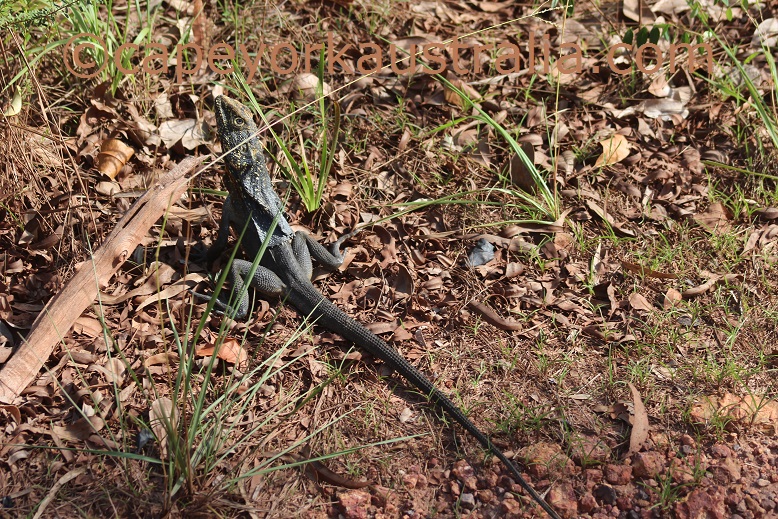 The Eastern water dragon is a very common animal.

You see it everywhere on the east coast, wild in the rainforest, but also in city parks and suburban gardens, and many other environments. 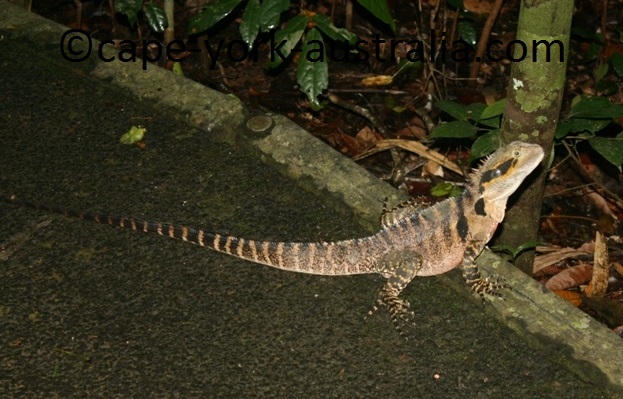 In fact there are two subspecies in Australia, the northern one is called I. l. lesueurii.


Both can run faster than you think, climb in trees, and swim, even completely submerged.

Both are light to brownish or greenish grey, with darker banding, almost a metre long, have fairly big heads and long legs, and a row spines along the back and tail.


Where Is the Eastern Water Dragon Found?


Like their name says they are animals associated with water.

They live in different habitats such as grasslands, woodlands, eucalypt forests, even urban parklands, but all are near different water courses such as lakes, creeks and rivers, where they can often be seen basking on logs, rocks and branches overhanging water.

Also as their name says as well, they are found in eastern Australia, from the coast to the hinterland and mountain ranges.


What Do they Eat and What Eats them?


They are meat eaters, preying mostly on insects, molluscs, fish, worms, small frogs and reptiles, as well as small mammals such as rodents, but larger individuals take prey even as large as cats and dogs.

And they also do eat berries, fruit and other plant food occasionally.

Young eastern water dragons are taken by carnivorous birds such as butcherbirds, currawongs and kookaburras.

They nest in a burrow in the sand near water, where the female lays up to 18 eggs and buries them for the incubation period.

Once the eggs hatch the young need to stay around for a couple of weeks at least before they are independent.