My father was the primary school principal & my mother was a nurse. I remember watching 4x4s coming across the jardine either getting driven or on 44 gallon drums.

Cypress hole was a lot different & bigger & was our primary swimming hole. You could also drive across skull creek (cant anymore) Dad used to park then boat in there & wash it.

There was also a swimming hole near skull creek, think we called it the black hole, we were always top scared to swim in there cause of the colour.

Because we had an army landrover, whenever the army came up if they needed spared they would raid our truck or our spare landrover we had in the front yard.

I used to ride my little monkey bike 5occ dirt bike with my mates out to the airport we'd race each other down the airstrip! Some of the fish we caught in Jackey Jackey were incredible, so was the size of some of the crocs we saw.

We left our tinny moored in there one night & came back to find it had been flipped over by a croc! I hated that creek after that, was even worse scrambling up the makeshift mud bank they called a boat ramp!

We also hada permanent campsite setup on big dayman island & we would go camping there all the time, was awesome, had the island to ourselves.

We walked the perimeter of the island once collecting stuff washed up, we found a big trawler net & Dad hooked it up all through the big tree we camped under so we could play in it or climb up if a croc came near the campsite.

Saw some massive sharks come right in close to shore when we would fillet the many fish we caught trolling, usually off possession island.

There was a lot more left of the crashed DC3 & bomber & we came across lots of left over stuff from army just left to rot in the bush.

Dad would just drive through bush making his own tracks or follow locals who had been there for years so we saw some impressive stuff, pity we didn't have GPS then!

I remember the teachers had an old EH holden that was white & painted up as a fire truck, complete with lights & sirens!

Don't know what happened to that, or our old yellow haines hunter boat we sold when we left. We used to liver opposite the old hospital & that road would flood like a river in the wet season, had great fun floating down there.

The only bitumen was past the shop, everywhere else was dirt. Mum & Dad have heaps of photos I'll dig up & post, fishing was tremendous, especially Laradinya. We even saw some tourists toboganning behind a boat (nude!)

They wondered why we were yelling at them cause there were some big crocs in there. If Dad was fishing mum would stand beside him with the 303 loaded ready to shoot if need be.

Was the best experience for me growing up, Weve been back 3 times, took Mum & Dad back in 2015 & they loved it even though its changed a hell of a lot.

Were going back again this year & will continue to do so so that my 5 year old son gets the taste of it & sees it before theres a bitumen road up & bridge over Jardine.

We'll go through Lakefield NPthis year, the OTT & camp at the water station on Dulhunty for a week as we normally don't see people there.

Let me know if you like some photos or any info my old man has plenty of stories, especially about the local cop at the time who was an alcoholic, we never had problems with him but the locals were very scared of him 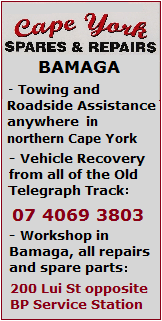 My full time project of 2020-21 is to improve every single page on this website with more information and more, better photos.With almost 300 pages and so many photos to go through,
it is very time consuming work, but it is gradually happening, right now :-)