Australian frogs are abundant in tropics.


Cape York and tropical north Queensland have more than 60 species, almost half of which are endemic to the area (i.e. found nowhere else).

The most obvious ones are the most spectacular - the green tree frogs, which come to human dwellings and thrive in bathrooms, toilets, near kitchen sinks - anywhere there is water and humidity.


But there are many, many other ones in the bush that are not so easy to see, and all are native, except the poisonous cane toad. 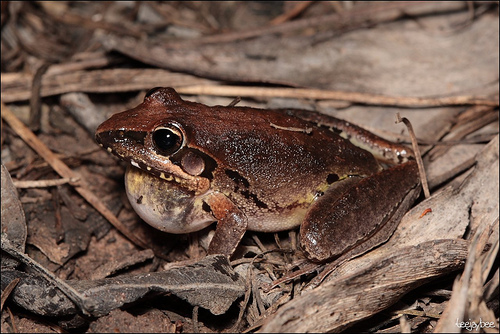 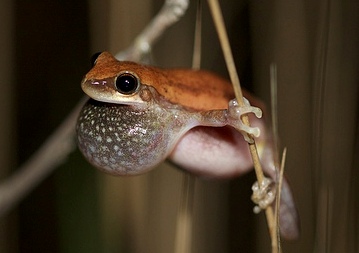 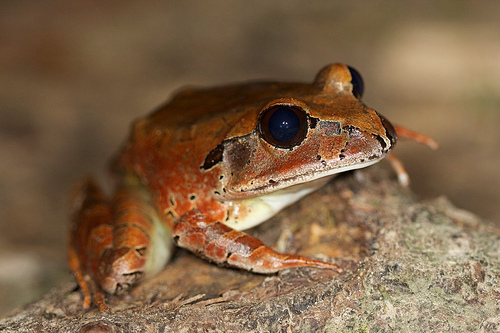 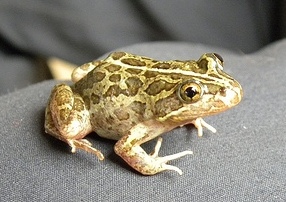 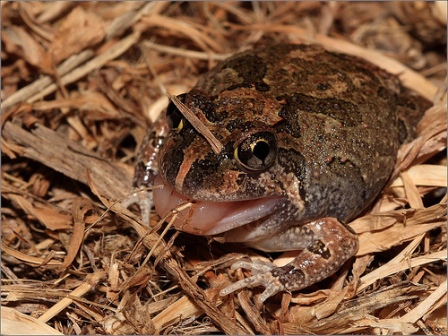 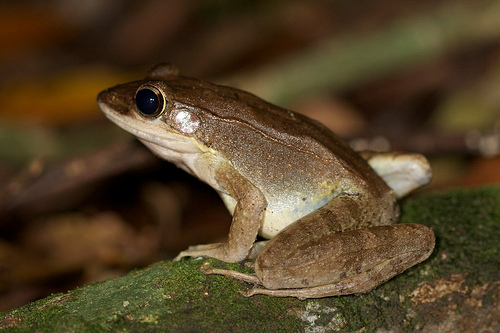 Woodfrogs
Woodfrogs are about 6cm long brownish or grey frogs with a pointed head. In tropical north Queensland we only have one species - the Australian woodfrog (Rana daemeli), which is found from Cape York peninsula in the north to Rollingstone (north of Townsville) in the south. 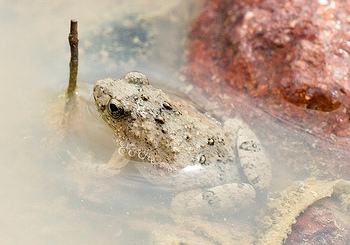 by A. Jaszlics via Flickr.com 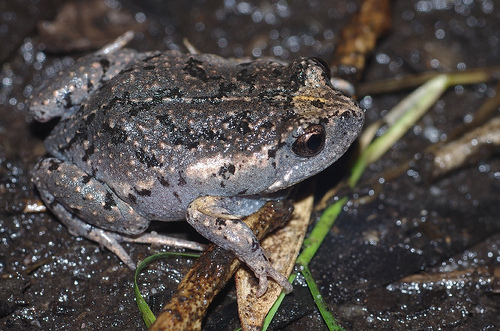 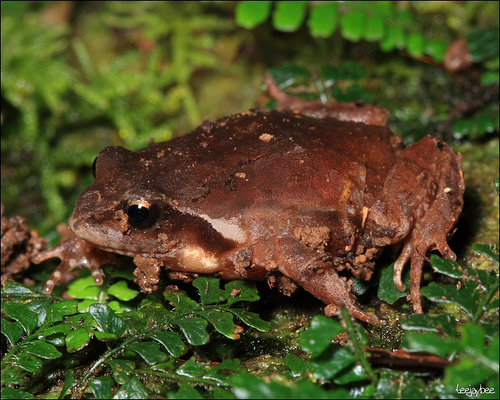 They are the most beautiful of all our frogs, and the easiest to see, thanks to their often bright colouring and the fact that they are not hiding on the ground where the brown frogs camouflage.

Instead they are on tree branches, in camp kitchens, bathrooms, even toilets, wherever there is water.

They are beautiful creatures great to watch. 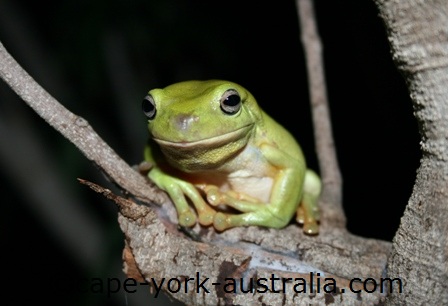 Common Green Tree Frog
Litoria caerulea is about 10cm long, green on the back (not the brightest), white under the belly, and unlike the others it has white eyes.

It lives in all habitats except rainforest, in eastern and northern Australia, as well as Papua New Guinea. 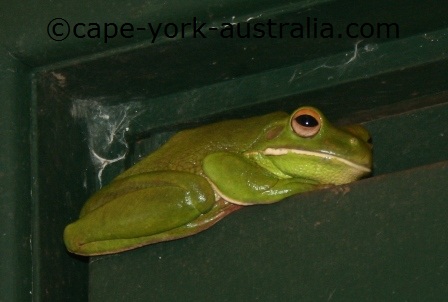 White Lipped Tree Frog
White lipped tree frog (Litoria infrafrenata) is 14cm long, and has about the same colouring except the white stripes along its lower jaw and back limbs.
Unlike the common green tree frog above, it has orange eyes. It lives in open forests, paperbark swamps and suburban areas from Cape York to Rollingstone. 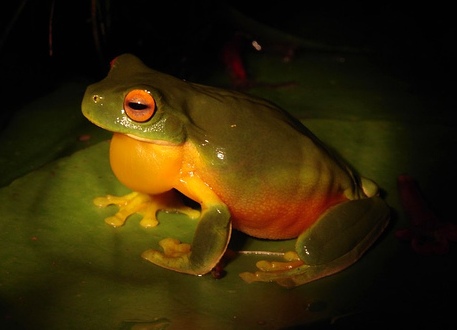 Orange Thighed Tree Frog
Litoria xanthomera is smaller - 6cm long, but brighter coloured, with a green back, bright orange-yellow belly and inside of legs, and reddish orange eyes.
It lives in tropical rainforests from southern Cape York Peninsula (Rossville-Ayton area) in the north, to Paluma Range National Park in the south. 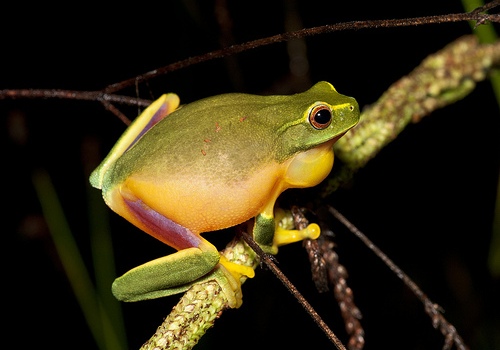 Graceful Green Tree Frog
Litoria gracilenta is even smaller, 4.4cm long, with a bright green upper head and back, bright orange lower jaw and belly, and brownish orange eyes.
Upper legs and other parts can be purple. It lives in open forest and woodland, and comes to green gardens. It is found from Cape York in the north to NSW in the south. 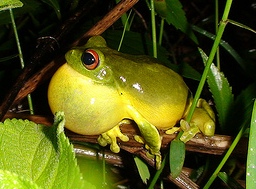 Orange Eyed Tree Frog
Litoria chloris is about 6cm long, deep green on the back and yellow to orange under the belly, with bright orange eyes.
This green tree frog is not found in Cape York, but in a coastal area  between Whitsundays in the north and central coast of New South Wales in the south (Port Maquarie - Newcastle area). 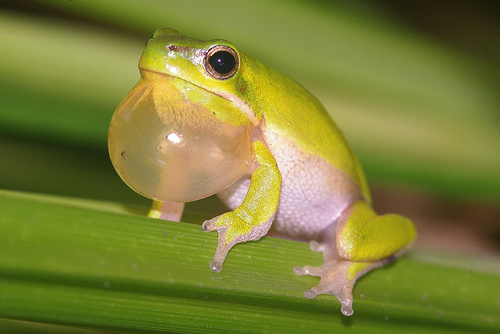 Eastern Dwarf Tree Frog
Litoria fallax is only 2.5cm long and not as bright green as the three above, more often it is olive green like the common treefrog.

It has a white underside and dull orange eyes.
It lives in open forests, near temporary or permanent waterholes, between the Daintree area in the north and Sydney in the south.

by Rantz via Flickr.com

Northern Dwarf Tree Frog
Litoria bicolor is a 3cm long slender frog and also rather dull in colour, compared to some others above. Green on the back, white under the belly, dull orange eyes.
It lives in tropical habitats except rainforest, and is found in northern Australia between Derby in the west and Bowen in the east, including Cape York peninsula.


The first thing you notice about the white lipped tree frog is its size.

That is also why its other name is giant tree frog.

That is a fair statement, and a fair size of a frog, at about 14cm of length.

Only after the size do you notice its white lips, at least when you first see it.

It has white stripes along its lips as well as hind legs.

It has large, webbed feet, large eyes with vertical pupils, and its colour can vary between green and brown. 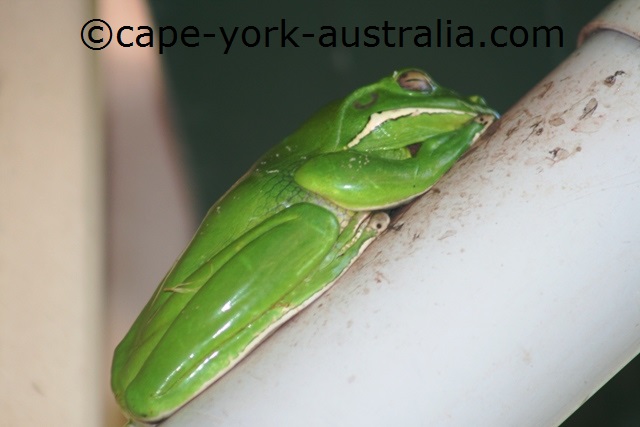 A White lipped tree frog on the outside of our house in Cooktown.

The white stripes are present regardeless of the colour of the body, and the stripes go pink in breeding males.

They are active during the night time, moving quite quickly in the vegetation, but sleepy day time, and not so quick to move when outside the vegetation.

They have quite a wide distribution in Indonesia and New Guinea, but in Australia they are only found in the coastal areas of Cape York peninsula (south a bit further, almost until Townsville).

They live in rainforests, but they also love banana plantations and come to houses.

They eat insects and spiders.

The males sound like barking dogs as they call the females after the rains during the Wet Season.

Tadpoles are brown, with a lighter stripe along the sides of their body.

White lipped tree frog can live up to 10 years which is pretty good for a frog.